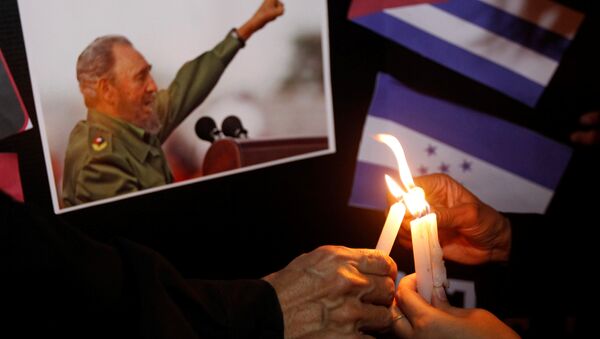 The survival of the Cuban revolution is guaranteed for the next few decades thanks to the careful planning of Fidel Castro, who was disturbed by the reform processes which took place in the USSR in the late 1980s, Professor Vladimir Borodaev of Moscow State University told RT.

Cuba After Fidel: How Castro's Brother Will Develop Relations With the World
In the 1980s late Cuban leader Fidel Castro began making preparations to ensure the survival of the Cuban revolution after the end of his rule. As a result Cuba can expect a stable transition to a new generation of politicians, under the stewardship of his brother Raul, Professor Vladimir Borodaev of Moscow State University told RT.

As Soviet leader Mikhail Gorbachev undertook perestroika (rebuilding) in the late 1980's, a period of market-oriented economic reform which ultimately ended in the collapse of the Soviet Union, Castro warned against excessive reliance on market mechanisms, and began to worry about the trend of events.

In an interview with Russia's Izvestiya newspaper on Saturday, Gorbachev himself said that the Cuban leader expressed reservations over the new course.

"To be honest, Fidel Castro was worried about perestroika in the USSR and warned against it. The internal processes in the Soviet Union which even resulted in a coup, caused him very great distress. Relations with Cuba changed, but we still remained friends forever, and we appreciate that history which developed and evolved thanks to the efforts of many generations," Gorbachev said.

Fidel Castro’s Death Heralds Period of Change for Cuba
Professor Vladimir Borodaev, a political scientist at Moscow State University, told RT that the difficult process of reforms undertaken to ostensibly modernize the USSR made a mark on Castro, who was determined to avoid similar upheaval in Cuba.

"It was clear to him that Gorbachev was destroying the country, so when he returned from Moscow Castro started preparing the economic, political and judicial foundations. In the 1990s he started forming a new political system – he started to attract 'young pragmatists' aged 35-55 years old to the party, and then his brother Raul reformed it (the party)," Borodaev said.

The political scientist explained that at helm of the Cuban government today are those who took part in the Сuban revolution of 1959, in which Castro's 26th of July Movement led a revolution which toppled the regime of Fulgencio Batista, a dictator supported by the US who had governed Cuba since 1952.

Before he succeeded Fidel as President in 2008, Raul Castro served as Cuba's Defense Minister and Deputy Prime Minister. Raul brought a new cadre into the lower and middle echelons of government, people who had taken part in international operations in support of Marxist-Leninist movements in countries such as Angola and Nicaragua.

"For as long as the generation of internationalists is in power, nothing will budge, another 15-20 years is guaranteed. It's like it was in our country when the generation what went through the Second World War was in power, everything was in order," Borodaev told RT.

Fidel's Legacy: 'Cubans Give Us Example of How to Develop and Live'
At its 7th Party Congress in February 2016 the Communist Party of Cuba adopted a new economic policy, which will dictate the country's economic policy over the coming years.

Borodaev said that Cuba wants to pursue a "middle path" of economic development which maintains socialism, and bears some similarities to Vietnam's economic modernization.

"Raul came to power to strengthen socialism, not be its gravedigger," he said.

"Right now they have 1.5 million people who are self-employed. It is forbidden to engage in big business, but it's possible to employ up to 50 people."

"They want something like Vietnam, where big business exists but under strict government control. Strict control means you don't steal, you don't take bribes, you give a percentage to the state and you will receive your income."