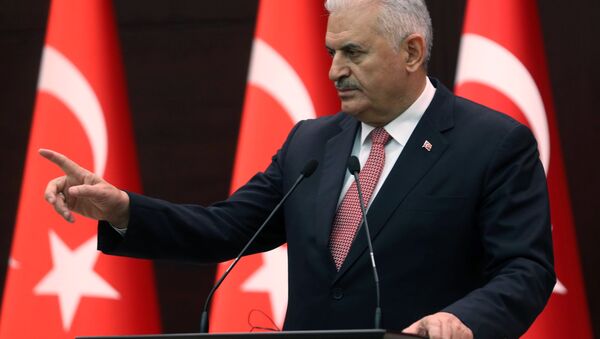 Turkey Confirms Death of 3 Troops in Alleged Syrian Gov't Airstrike
ANKARA (Sputnik) – On Thursday, Turkey's General Staff confirmed the death of three of its troops near Syria's city of al-Bab, claiming that the attack was carried out by Syrian government jets.

"The Turkish General Staff is investigating the incident. It is essential to determine who is responsible for the airstrike and why it was carried out. The relevant sides have been warned that any repeat of such a move is unacceptable… The incident near the city al-Bab will not impact Turkey's determination to complete Operation Euphrates Shield," Yildirim told the TRT channel.

Yildirim promised that Turkish forces would not head to Aleppo.

Afrin is currently an enclave in the northwestern corner of Syria, separated from the rest of Rojava by the IS, Syrian opposition and Turkish forces currently fighting in the area of al-Bab.

On August 24, Turkish forces, backed by US-led coalition aircraft, began the Euphrates Shield operation to clear the Syrian border town of Jarabulus and the surrounding area of the Islamic State, outlawed in Russia and many other countries. After seizing Jarabulus, Turkish forces and opposition fighters pushed further south into the Aleppo governorate.

The operation has been widely criticized both by the Syrian Kurds and Damascus, who accuse Ankara of violating Syria's territorial integrity.