Italy Next in Line to Shock Government With Referendum, Polls Predict 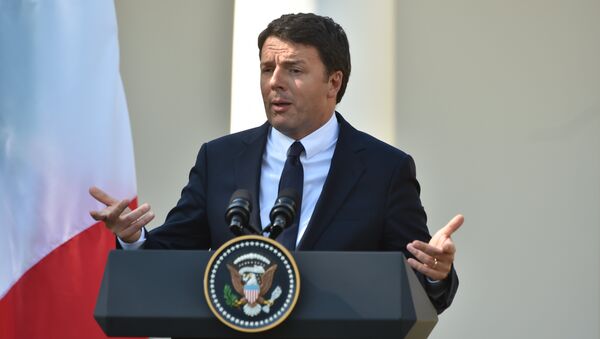 © AFP 2023 / Nicholas Kamm
Subscribe
International
India
Africa
Prime Minister of Italy Matteo Renzi is likely to lose a December 4 constitutional referendum, which could lead to the country’s exit from the EU, according to a recent poll.

Renzi Vows to Quit if Italians Fail to Back Constitutional Reforms in Referendum
Matteo Renzi, the Prime Minister of Italy, has put his career at stake on a constitutional referendum to limit the power of the senate and make it easier for the prime minister to pass laws. However, a recent Demos poll shows that Italians are more inclined toward a ‘No' vote. Renzi vowed to resign if the referendum lost.

According to Luca Comodo, director at the polling company Ipsos, most voters believe that rejecting Mr Renzi's plans is a vote for change, according to Express.co.uk.

"The south is where protest and rage are amplified," said Mr. Comodo.

Italy Lost Over $6Bln After Introduction of Anti-Russia Sanctions - Lega Nord
UK-based The Economist states that Renzi's reforms, while sensible at first glance, fail to deal with an underlying unwillingness of Italians to reform. According to the publication, the political system in Italy, even in its current state, could be forced to pass laws in a relatively straightforward manner, if pressed. But it is an inherent resistance to reform that plagues the country and its populace, the publication notes. The article mentions that if Renzi resigns, it would pave way for the Five Star Movement, a coalition calling for an economic referendum on leaving the euro, and is polling just a few points behind Renzi's Democrats.

Most Italians are not likely to base their vote on a thorough analysis of proposed constitutional changes, but rather on their own confidence, or lack thereof, in Prime Minister Renzi, political researchers say. Many Italians tend to believe it is Renzi's government that is responsible for the country's current troubled economy.

"Many people are voting No because they are against Renzi, without even knowing what this entails," said Martina Riccio, a 32-year-old market researcher.

"We should send this government packing and let everyone know how much they've screwed us," Express.co.uk cites one Italian saying.