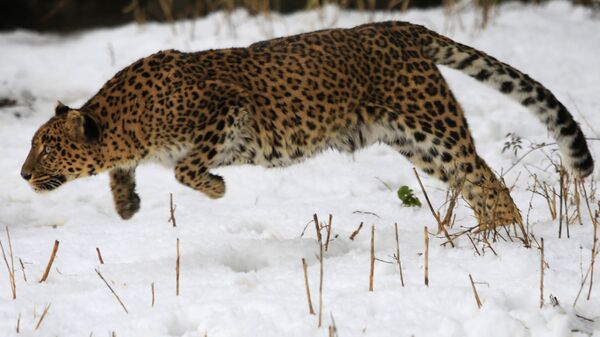 Hours after wildlife enthusiasts celebrated the arrival of a leopard in a Delhi biodiversity park, another met a gruesome fate by a mob in a nearby village.

New Delhi (Sputnik): A leopard was beaten to death by locals of a village near city of Gurugram in the Indian state of Haryana on Thursday. The leopard, which had strayed into a village in search of food, was assaulted with sticks and lethal weapons allegedly in the presence of police and wildlife officials.

​According to the villagers, the dazed animal ran around in the by-lanes of the village for close to three hours and injured nine people, including a policeman.

"The village guard had spotted the leopard about two weeks ago and informed me. Later, we heard that the leopard had killed a cow and a goat in a neighboring village. It was spotted again on Thursday, and the police were informed," said Dhan Singh, the village headman.

Tiger's Den: India to Set Up First Tiger Cell
However, the headman alleged that the Forest Department teams reached an hour later and did not have the equipment to catch the animal. "They were carrying a net that was not big enough to catch an adult leopard. They did not have a tranquilizer gun either," said Singh. The villagers also asserted that they wanted the Forest Department to catch the animal alive, but they brought the tranquilizer gun too late. After lynching the leopard to death, the villagers dragged his body onto the main road and staged a protest against the police and the Forest Department.

Conservator of Forests (South Circle) M.D. Sinha clarified that the department was short of logistics, including vehicles, and had only one tranquilizer gun for six districts. "Almost one-third of my department officials reached the spot soon after they got the information. The leopard was killed even after the tranquilizer gun reached the village. The locals actually prevented the animal from being tranquilized," he added.

In recent times, leopard sightings have increased around the Aravalli hills bordering Delhi. Experts say animal-man conflicts have increased because humans have encroached on forest land.