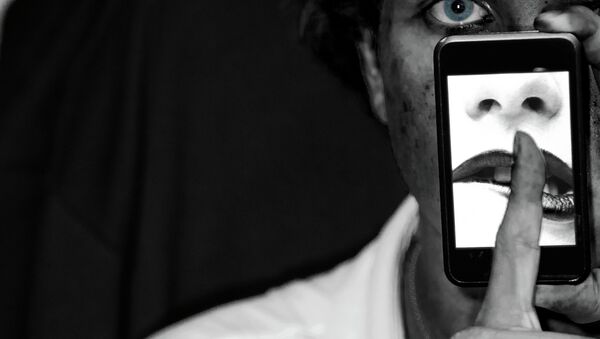 © Flickr / BlondieISFC
Subscribe
Freedom of speech would be very much threatened in the United States if the US government and major media institutions like Facebook and Google were permitted to censor alternative and independent news sites and the corporate mainstream media was not called out for building a narrative for such an outcome, analysts told Sputnik.

WASHINGTON (Sputnik) — According to Independent Institute Center for Peace and Freedom Director Ivan Eland people are to judge the reputations of media outlets.

"The government, Google and Facebook should not be censoring news sites. Let the public evaluate them; their reputations will quickly spread," Eland told Sputnik on Tuesday.

EU Resolution Against Russian Media Exposes 'Degradation of Parliamentarism'
Facing a barrage of criticism since their candidate Hillary Clinton was defeated in the November 8 US presidential election, establishment Democrats have identified a multitude of allegedly "fake news" sites which they blame for the election defeat.

Merrimack College Assistant Professor of Communications Melissa Zimdars, a self-proclaimed feminist activist, has put together a list of what she believes are false news sites. The list — extensively covered by the US corporate mainstream media — includes virtually all major alternative and independent media news outlets, including Zero Hedge, Breitbart, Infowars and others.

"Will they ridiculously censor humorous fake news sites like The Onion? Thomas Jefferson might have said don't censor them, but combat them with accurate news sites," Eland pointed out, adding that suppressing such sites as unsupported by evidence and missing more important points.

Sputnik Editor-in-Chief: EU Resolution to Counter Russian Media Was Anticipated
University of Copenhagen History Professor Matthew Dal Santo agreed that the "fake news" argument risked giving powers of censorship and suppression of free speech to government and media bodies that were likely to abuse them.

"The question is who will police the frontier between truth and falsehood and according to what standard?" Dal Santo asked. "Will left-leaning satirical websites such as The Onion and Daily Mash be censored or will the axe only fall the rightwing sites that have attracted Democrats' ire?"

The US mainstream media had already lost its own credibility in the eyes of large sections of the American public for its massively biased coverage, Dal Santo pointed out.

"There is already the impression in many circles that the mainstream press is selective in the stories it chooses to report and in its choice of terms to frame them. How will the reportage of fact be sifted from opinion? And what happens in cases where the truth simply isn't known?" he asked.

Dal Santo said he would be concerned if powerful individuals, such as Facebook founder and CEO Mark Zuckerberg, who is now worth more than $51 billion, would be given the power to choose which web sites they could suppress.

Resolution Against Russian Media: 'This is Beyond the Pale'
"These aren't questions I would want to leave in the hands of Mr. Zuckerberg," he said.

Dal Santo added the situation resembles a hornets' nest as the corporate media continues coverage the way it did during the presidential race.

Numerous critics have pointed out the corprate media's biased coverage, complete with half-truths, fake polls and other unethical approaches to journalism, has resulted in a massive shift by the public to alternative and independent media sites.

"Most people expect the press to observe basic ethical standards regarding the truthfulness of its reporting," he said.

Neither society nor any worthy cause is helped by the spreading of falsehoods, Dal Santo concluded.