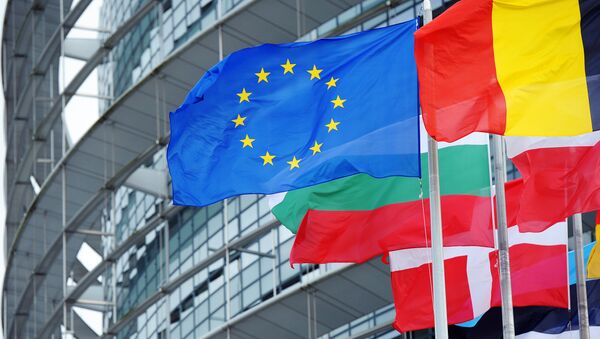 Jaksa Scekic, Serbian journalist and TV producer in the Reuters bureau in Belgrade, said that the resolution by the European Parliament to counter several Russian media is a response of the Western hawks to the strained relations between Moscow and Washington.

EU Resolution on Sputnik, RT: 'Media Siege Formulated by the United States'
MOSCOW (Sputnik) — The recent European Parliament resolution seeking to counteract Russian media is a response of the Western hawks to the strained relations between Moscow and Washington, which might see changes for the better under Donald Trump's administration, Jaksa Scekic, Serbian journalist and TV producer in the Reuters bureau in Belgrade, told Sputnik.

"When two powers do not communicate with each other, when there is no dialogue, during which they could discuss the problems, it is quite natural that such requests appear … I think that if after January 20 there are changes in the US-Russia relations, this rhetoric will gradually subside," Scekic said.

The journalist cited an instance of the Cold War-era, namely the period of political repression and aggressive rhetoric against supposed communists Republican US Senator Joseph Raymond McCarthy argued in favor of, as an illustration of tensions in bilateral relations that impacted all spheres, including media.

EU Resolution on Russian Media Violates UN Charter
Scekic, who worked with Sky News for many years, including as its correspondent from Iraq, has recently been attacked through Twitter for agreeing to participate in the debate on the US election, organized by Sputnik Serbia within the Belgrade book fair. One of the main NATO lobbyists in Serbia, Jelena Milic, wrote to Scekic that she would remove it from friends, if he accepted Sputnik's invitation.

Scekic replied ​​to Milic "If I can provide comments to Voice of America, I can do it for Sputnik as well."

The initiative in the EU Parliament was launched by Anna Elzbieta Fotyga, of Poland, who drew parallel between Russian strategic communication and propaganda disseminated by the IS terrorist group, which is banned in Russia and many other countries.

Russian President Vladimir Putin said the move demonstrated a "degradation" of the democratic idea in the West. He praised the news agency Sputnik and the international broadcaster RT for their work, saying he hoped the resolution would not entail any media curbs.