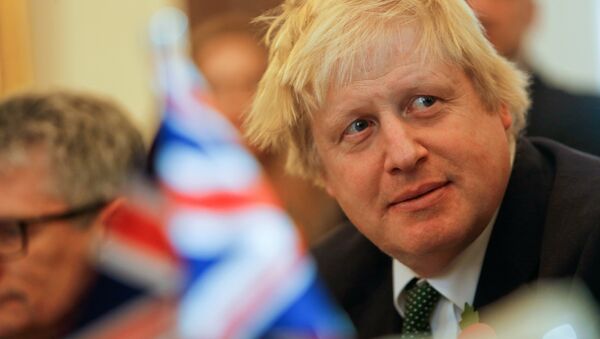 © REUTERS / Darrin Zammit
Subscribe
According to the UK foreign secretary, the country is ready to work with US President-elect Donald Trump on the successful implementation of the Iranian nuclear deal.

$400 Mln Payment From US to Iran Part of Nuclear Deal - Iranian Minister
MOSCOW (Sputnik) — UK Foreign Secretary Boris Johnson said on Tuesday that Britain was ready to work with US President-elect Donald Trump on the successful implementation of the Iranian nuclear deal.

"The government remains committed to the nuclear deal in Iran and we look forward to working with the new administration in the United States to make it a success," Johnson said in the House of Commons.

He added that the UK authorities believed there was a "merit in the deal."

"We should be positive about our engagement and keep it on the road," Johnson said.

On November 8, Republican candidate Trump won the US presidential election with 290 electoral votes. During the 2016 presidential campaign, Trump has repeatedly criticized the Iranian nuclear deal which limits Tehran's nuclear program to the peaceful purposes in exchange for the easing of international sanctions on Iran, calling it the "stupidest" deal of all time.

In July 2015, the P5+1 group of countries, comprising the United States, Russia China, France and the United Kingdom plus Germany, reached an agreement with Iran to ensure Tehran’s nuclear program remained peaceful in exchange for sanctions relief.

In mid-January, the sanctions on Tehran were removed after the International Atomic Energy Agency verified Iran’s compliance with the deal.

On November 11, Trump’s adviser on foreign policy Walid Phares said the US President-elect would review the agreement on Tehran's nuclear program.