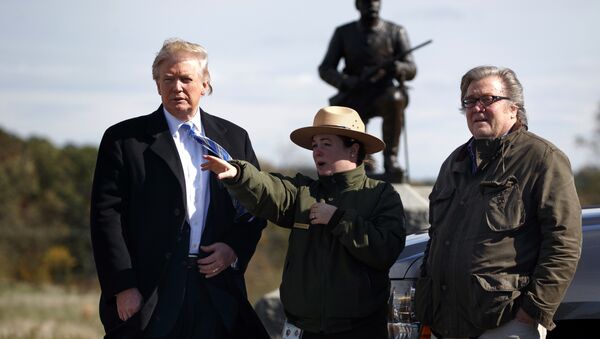 At least two protests have been organized in the city on Monday night, taking place at Union Square and in front of Trump Hotel in Soho.

Jewish orgs in New York protest Bannon outside the @ZOA_National gala, where he was set to speak (but apparently never showed). #IfNotNow pic.twitter.com/vFQzvW9mQ4

​"Bannon's appointment as chief strategist is a step backwards," protest organizer Julia Withers told Sputnik. "We must send a message to Trump and Congress that America will not allow a white supremacist to be a part of our government!"

Other demonstrators echoed the sentiment, pointing out that while the White House does not have the power to directly block the appointment, individual senators can put a hold on appointees.

"It's up to Senate Majority Leader to honor the hold," another demonstrator said. "Call your representative today and tell them to protest Bannon nomination!"

Protesters Converge on Trump Tower in Chicago (VIDEO)
Numerous high-ranking politicians have been outspoken in their sharp criticism of Bannon’s nomination, accusing him of ties to white supremacy, sexism and anti-Semitism in the articles published on the alt-right website he oversaw as well as in interviews.

"There must be no sugarcoating the reality that a white nationalist has been named chief strategist for the Trump Administration," House Minority Leader Nancy Pelosi said in a statement on Monday.

Many protestors on Monday were gravely concerned with alleged anti-Semitic statements Steve Bannon has been making.

"Jews Against White Supremacy", "End the Occupation", and #FireBannon were among the taglines on handheld banners carried by the protestors. "No KKK! No fascist USA!" the group chanted at one point.