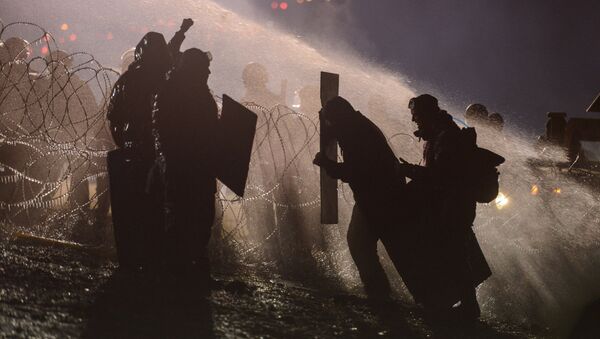 Clashes between the protesters and police near the Dakota Access pipeline site left at least 167 people injured after an attempt to cross the bridge on a state highway, media reported Monday.

MOSCOW (Sputnik) — According to CBS News, protesters claimed having been hit with tear gas, rubber bullets and water during the demonstration. The sheriff's office reportedly confirmed later that water cannons were used to prevent protesters from crossing the law enforcement line at the Backwater Bridge.

Police and about 400 people who were protesting the Dakota Access Pipeline clashed. https://t.co/wUOObRjfGN

​Seven individuals were taken to the hospital as a result of clashes on Sunday night, the broadcaster said.

Demonstrations organized by an indigenous community in North Dakota have been ongoing since April. The protest, which has gathered thousands of people across the country, was provoked by the decision to build a pipeline, which would carry oil from western North Dakota to Illinois. The local population fears that the pipeline may pollute their drinking water despite guaranties provided by the operating company.