At Least Seven Killed, 25 Injured in Clashes Between Clans in Libya's Sabha 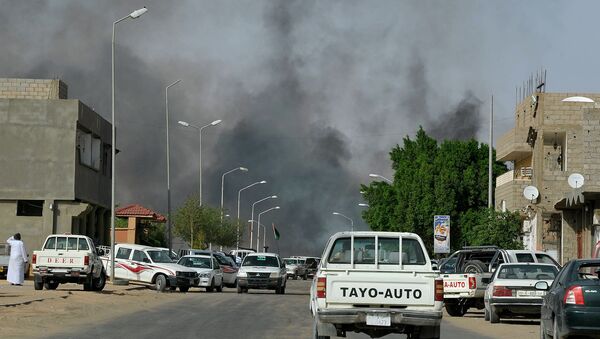 Seven people were killed, 25 wounded, including severe injuries, as a result of clashes that erupted between the clans in the Libyan city of Sabha, according to the head of the municipality, Hamid Hayali.

SABHA (Libya) (Sputnik) — At least seven people were killed and 25 injured as a result of clashes that erupted between the clans in the Libyan city of Sabha, the head of the municipality, Hamid Hayali, told Sputnik.

"Seven people were killed, 25 wounded, including severe injuries that need urgent operations," he said, noting that fighting continues in several streets of the city. The official did not elaborate on specific reasons behind the conflict.

Libya Joins US-Led Coalition Against the Daesh as 68th Member
According to the municipality head, there are concerns that the ongoing clashes can benefit the Islamic State (ISIL or Daesh, banned in Russia) militant group. He noted that local authorities, together with the elders, are trying to persuade the parties to stop the violence as soon as possible.

Sabha, with a population of about 100,000 people, is located in the south-western part of Libya. Relations between the clans and tribes in Libya remain tense after the overthrow of country's leader Muammar Gaddafi in 2011.