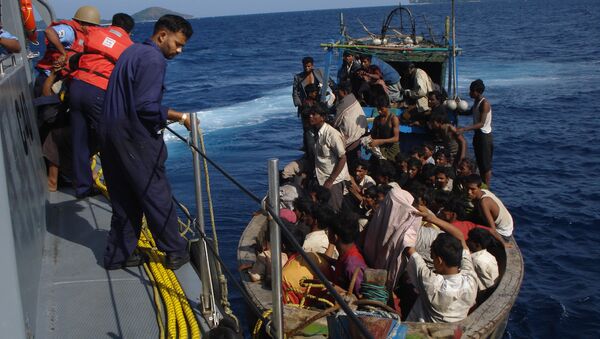 © AFP 2021 / STR
Subscribe
The Indian Government admitted in Parliament that 20 million Bangladeshi migrants may be staying clandestinely in India and that many could pose a grave security threat. Estimates of undocumented Bangladeshis living in India have risen from 12 million in 2001 to the present level.

The Indian Government is concerned over the rise in number of illegal Bangladeshi migrants which were around 12 million in 2001. The Government is also concerned as millions of these migrants have assimilated into local populations. Many of them have migrated from the northern parts of Bangladesh where radical Islamists are active.
The ruling BJP is dead against allowing the illegal Bangladeshi migrants to stay in the country. During his election stumping speeches, Prime Minister Narendra Modi had vowed to deport these illegal migrants.

Although Rijiju did not give any timeline for deportation, he reiterated that, “deportation of illegal staying foreign nationals is a continuous process.”

Illegal immigration from Bangladesh has been a major issue in the North-Eastern states of India. The states of Assam and West Bengal are considered the worst hit due. In fact the 1971 war was triggered due to massive displacement of people from the then East Pakistan, as Bangladesh was then called, into India due to atrocities by the Pakistan Army.

Indian intelligence agencies recently submitted a report to the Home Ministry citing increasing threat from these migrants. Accessed by The Sputnik, the report says that, "ever increasing number of illegal immigration from Bangladesh will pose a grave threat to the safety and security of the country. These illegal migrants staying in various parts of the country could be used by various terror organisations and even by the Daesh  network."

Both countries share a 4,096 km long international border which is porous, making it easy to infiltrate from Bangladesh.