Trump Deportation Plans Would Cause Distrust Between Police, Communities 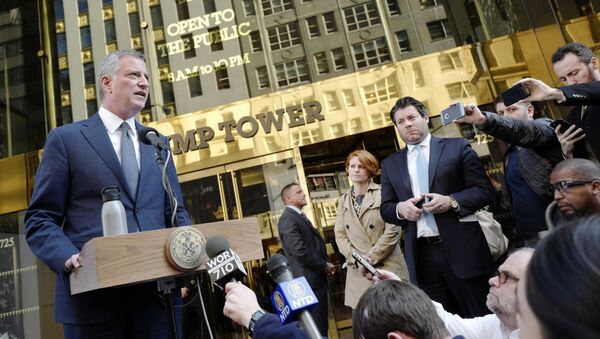 New York City Mayor Bill de Blasio said that Donald Trump’s plans for mass deportations could create a rift between US police all over the country and the communities they serve.

Los Angeles Police Chief Unwilling to Enforce Trump Deportation Plans - Reports
WASHINGTON (Sputnik) — Donald Trump’s plans for mass deportations once he is sworn in as US president would create problems between police and the communities they’re hired to protect and will prove counterproductive to law enforcement, New York City Mayor Bill de Blasio told reporters after meeting with Trump on Wednesday.

"I gave him the perspective of the NYPD, that any initiative that would create a rift between our police all over the country and the communities they serve…that would sow distrust between law enforcement and neighborhoods, would be counterproductive," de Blasio said at a news conference outside Trump Tower, the president-elect’s longtime residence.

Furthermore, de Blasio said he stressed in his meeting with Trump the importance of inclusive policies that encourage residents to cooperate with police officers.

Trump Set to Begin Implementing Tough Immigration Policies Early in Presidency
He noted that the New York Police Department includes in its ranks 900 Muslims, a group Trump targeted during his presidential campaign.