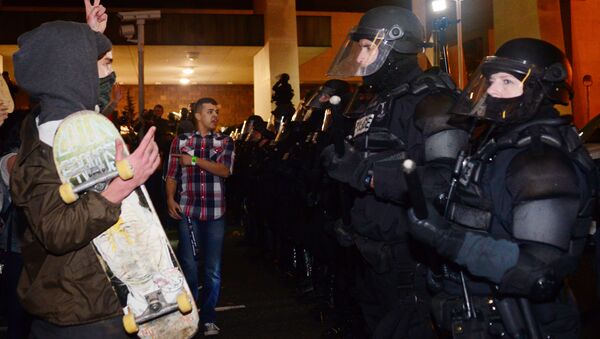 Police of the western US city of Portland declared a curfew for minors under 14 amid the ongoing protests against the election of Donald Trump as the country's next president, the press service of the local police department said Sunday.

US Response to Anti-Trump Protests Exposes Double Standards in Full Play
MOSCOW (Sputnik) — Protests in Portland have been ongoing since Wednesday when Donald Trump emerged as the winner in the US election, triumphing over Hillary Clinton, who was his Democratic rival, and was considered a favorite by many pollsters and analysts.

"Weekend Curfew for kids under 14 is 10:15 pm, midnight for those 14-17 years old. Make sure your kids are home safe!" the press service said on its Twitter account.

The press service added that police officers had already detained "dozens of people" throughout the night, saying about 19 detained people by 08:00 GMT and numerous detentions later in the day.

Dozens of people arrested in protests Saturday night and Sunday morning. Full details will be released at noon on Sunday.

During the presidential election, Trump secured at least 290 Electoral College votes, which is 20 more than 270 votes required to win the presidency.