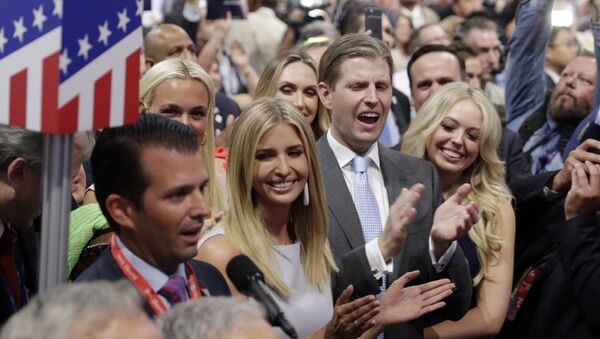 © AP Photo / Carolyn Kaster
Subscribe
US President-elect Donald Trump has shifted his children and relatives from his campaign to his transition team, naming daughter Ivanka, sons Donald Jr. and Eric, and son-in-law Jared Kushner on November 11 to the 16-member executive committee that will help choose his cabinet and guide his early strategies.

Vice President-elect Mike Pence is heading the team, having taken over for Governor Chris Christie of New Jersey.

Trump's administration will need to make thousands of political appointments in the coming weeks.

"The mission of our team will be clear: put together the most highly qualified group of successful leaders who will be able to implement our change agenda in Washington," Trump said in a statement.

The Trump Organization said the same day that it intends to transfer management control of the company to Ivanka, Eric and Donald Jr. and a team of executives. "This is a top priority at the organization and the structure that is ultimately selected will comply with all applicable rules and regulations," the statement said.

Trump had said during the campaign that he would put his assets in a blind trust, as most presidents do. Typically, a blind trust uses an independent financial manager with no relationship to the owner: having one's children as managers does not fit that description.

"It doesn't meet any of the standards of a blind trust if the kids are running the company," Kenneth Gross, a Washington lawyer who advises political clients on compliance and ethics, told Reuters.

"If they're going to be involved in government functions – and they're starting down that road – and running the business, that's going to make it very difficult to separate the government and business functions and deal with the conflicts of interest," Gross said.

There are reports that Trump's team seems unready for the actual tasks of governing. The Los Angeles times reports that after Trump's November 10 meeting at the White House, Obama officials noted that the president-elect and his staff seemed unprepared to discuss staffing issues and not fully aware of the scope of the process. A follow up meeting scheduled between aides of the incoming and outgoing administrations was cancelled.

A Republican source told Reuters that with the GOP bracing for a loss throughout the campaign, little solid transition planning had been done.

"I was on [2012 GOP presidential candidate Mitt] Romney's transition team, and it was a well-oiled machine months before the election. Now there’s a scramble," the source said.