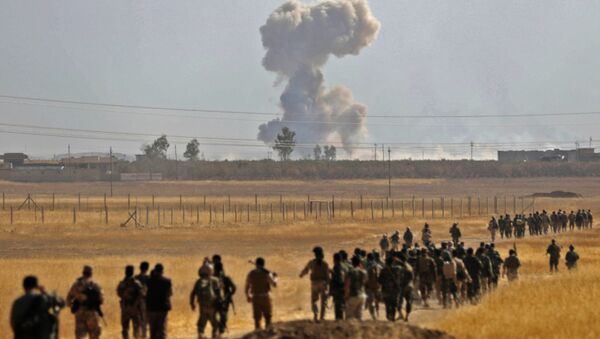 © AFP 2021 / SAFIN HAMED
Subscribe
Iraqi and Kurdish forces have separated and detained at least 37 men as they fled with their families from Mosul and the town of Hawija, about 75 miles to the south, the advocacy group Human Rights Watch said in a press release.

Iraqi PM Slams Amnesty International for 'False' Reports on Situation in Mosul
WASHINGTON (Sputnik) — Human Rights Watch noted it had spoken to 46 relatives and witnesses, who described security forces seizing men at checkpoints, screening centers and camps for displaced people. None knew where the men were being held nor had there been any contact with the detainees.

"When detainees are held without contact with the outside world, in unknown locations, that significantly increases the risk of other violations, including ill-treatment and torture," Human Rights Watch Deputy Middle East Director Lama Fakih said in the release on Thursday.

Following the liberation of other Iraqi cities, including Fallujah, Iraqi fighters in uniforms posted a series of videos on the internet of prisoners being tortured as suspected terrorists or collaborators.

Iraqi and Kurdish forces, backed by the US-led coalition against the Islamic State, launched a campaign on October 17 to retake the nation’s second largest city of Mosul, which has been held by the terrorist group for more than two years.