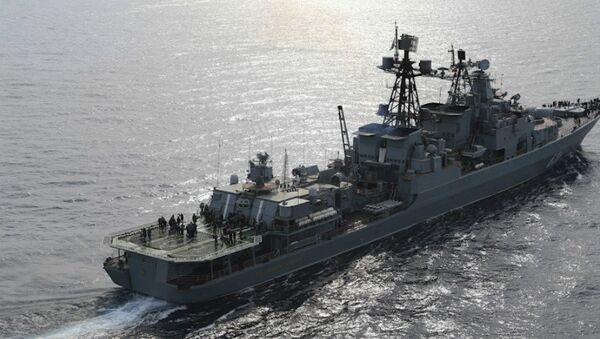 "On November 9 at 06:50 a.m. Moscow Time [03:50 GMT], Russia's Severomorsk and Vice-Admiral Kulakov anti-submarine destroyers detected a diesel-electric submarine of the Dutch navy (presumably Walrusklasse) which tried to approach and track the aircraft carrier group of the Northern Fleet," he said.

"Despite the submarine's maneuvering, we established a stable sonar contact with it. The ships had been tracking it for one hour and forced it to leave the area where the naval group was located."

"Such 'clumsy' attempts to maneuver in close vicinity to the Russian ships could have led to serious navigation accidents," Konashenkov said.

The spokesman added that the Russian naval group has been regularly detecting NATO submarines along its course. In early November, nuclear submarine Virginia was noticed at an attempt to spy on the Russian ships.

"It is noteworthy that submarines of such class, having big displacement, are not fit for reconnaissance," the spokesman observed.

On October 15, Russia's Northern Fleet's press service said that a group of warships headed by the Admiral Kuznetsov aircraft carrier, accompanied by the Pyotr Veliky battle cruiser, the Severomorsk and Vice-Admiral Kulakov anti-submarine destroyers and support vessels had been sent to the Mediterranean to hold drills and strengthen capabilities.