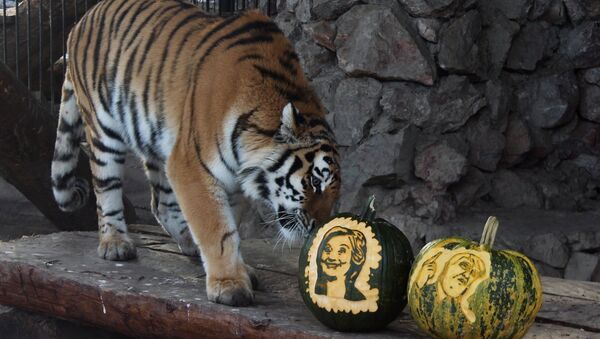 © Sputnik / Royev Ruchey
/
Go to the photo bank
Subscribe
As US voters go to the polls on Tuesday, a Russian tiger and bear have predicted the outcome of the close-run US presidential elections.

As Americans head to the polls to vote in the tight-run presidential election, animals at a Russian zoo have predicted the outcome.

Staff at the zoo in Krasnoyarsk took two pumpkins, stuffed them with meat and fish, and drew pictures of the candidates on them. The pumpkins were placed in a cage for the "electors," a bear and a tiger, to reach their verdict.

Tigress Yunona makes her prediction for the outcome of the US presidential race.

"The tigress Yunona showed female solidarity and immediately went for the pumpkin with the Hillary portrait, but had a moment of doubt and decided to consult with her 'husband,' Siberian tiger Bartek. We don't know what Bartek advised her, but Yunona decided to go for Clinton after all," a spokeswoman for the Swarms Creek Zoo told RIA Novosti.

Polar bear Felix makes his prediction on the outcome of the US presidential race.

Polar bear Felix was more thoughtful in his approach, and took several minutes to make his decision. Eventually, "he emphatically voted for Trump," the zoo revealed.

While the Russian animal verdict was a dead heat, the majority of animals who have voted in public appear to prefer Trump.

In Arkansas last month, a pig race in which the competitors wore a Clinton wig and a Trump wig was won by the Trump pig. 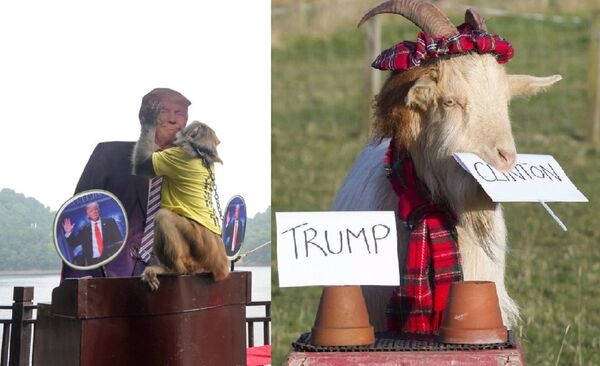