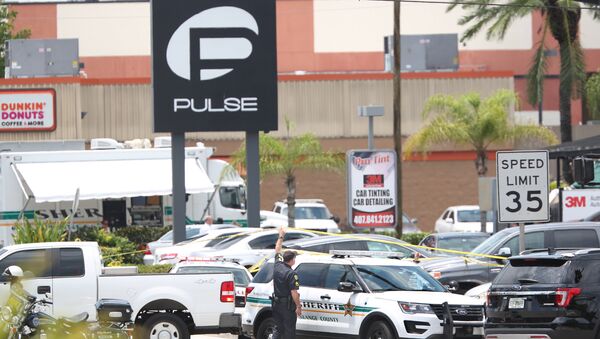 © AFP 2023 / Gregg NEWTON
Subscribe
International
India
Africa
Orlando Mayor Buddy Dyer said that the authorities of the US city of Orlando, Florida plan to purchase the Pulse gay nightclub where a deadly shooting occurred in order to organize a memorial there.

MOSCOW (Sputnik) – The authorities of the US city of Orlando, Florida are going to buy the Pulse gay nightclub where a deadly shooting occurred in order to organize a memorial there, Orlando Mayor Buddy Dyer said Tuesday.

"The Pulse nightclub is the site of the most tragic event that has ever occurred in the history of the City of Orlando… To start this process, the City of Orlando has entered into a contract to purchase the land on South Orange Avenue," Dyer said in a statement.

Chicago School Cancels Haunted House That Depicted Pulse Nightclub Massacre
The Orlando City Council is going to vote on the approval of the $2.25-million purchase of the nightclub.

On June 12, Omar Mateen, 29, who pledged allegiance to the Islamic State (IS, or Daesh) terrorist group, opened fire in the Pulse nightclub, killing 49 people and injuring more than 50 others in what is one of the deadliest mass shootings in US history.