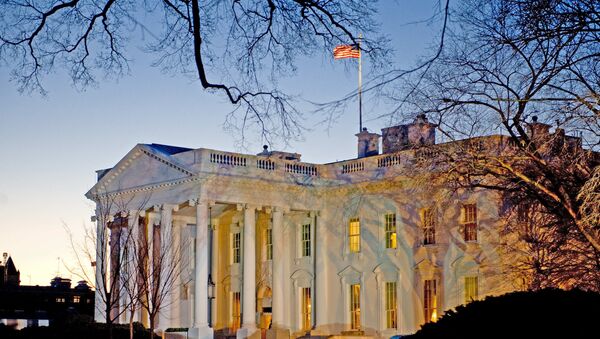 © AFP 2021 / PAUL J. RICHARDS
Subscribe
Under the US Constitution, “No Person except a natural born Citizen” can be elected to the Office of President. Nor can any person under the age of 35 be eligible to that office, and been fourteen years a resident within the United States. Democratic and Republican presidential candidates are nominated at the party primaries or caucuses.

US Stocks Rally One Day Before Presidential Election
MOSCOW (Sputnik) — Historically, caucuses were the first to emerge as a political form (it is believed that the term was derived from one of the Indian languages, where it meant “to come together and make great noise”). Caucuses are meetings of party functionaries, held consistently from the bottom of a state party hierarchy to its top: the grassroots (parishes and villages) – mid-level party committees (districts, counties, congressional constituencies) – state party conventions.  At each of these stages, party members vote for the delegates who will represent them and speak for them at the next level of the state party organization.

There are open caucuses and closed caucuses.. There are also several types of primaries. Closed primaries are for voters who have declared that they belong to a political party and been registered as party members.

Open primaries are for all voters in a state regardless of their party affiliation, with one limitation: a voter can take part in primaries of just one political party.

Blanket primaries are run by both parties.

State legislations do not regulate the procedure for holding nomination caucuses. Primaries are organized by the state authorities and conducted within the timeframes set by the states on their own.

The New Hampshire primary is the most popular and important event in a presidential election race. The state legislature approved a law in 1977 guaranteeing New Hampshire the status as the first primary state. It is believed that the voting in New Hampshire identifies a party hopeful with a high degree of certainty. In the 1980s, a phenomenon known as Super Tuesday emerged: it is the day when primary elections are held in many states simultaneously.

Clinton Maintains 6-Point National Lead Over Trump on Eve of US Election - Poll
A series of primaries is followed by party conventions (congresses) that officially declare a party’s support for its presidential candidate.

Since the 1970s, the presidential candidates who would be eventually nominated by party congresses are known in advance because they manage to gain support of the majority of delegates even before the end of the season of primaries and caucuses. As a result, the party conventions are now mostly ceremonial affairs. Their main stages include a keynote address by one (or several) party leaders, official nomination of a vice-presidential co-runner, announcement of voting returns by the delegation of each state, and approval of the party platform (a document setting down the party’s position on the entire range of main problems). As a televised political event signaling the beginning of the general election campaign, the conventions help to popularize a party nominee’s stance and clearly outline its distinction from the rival’s.

In addition, all state legislations allow the registration of independent candidates. But there is a number of limitations. Specifically, a loser at primaries cannot be allowed to run as an independent. A single candidate cannot be nominated for more than one elected office. Formally, US President is elected by the College of Electors. Its composition and procedures of operation are determined by Article I of the US Constitution and Amendment XII thereto.

US State Dept. Asks for 5 Years to Review Deleted Clinton Emails - Watchdog
The College of Electors includes 538 specially elected persons. The United States has 51 colleges of electors, with candidates nominated by the two main political parties – the Democratic Party and the Republican Party – in each of the 50 states (in keeping with their respective laws) and in District of Columbia. Members of the US Congress and government officials are barred from nomination. The number of electors in each state equals that of Senators and Representatives the state sends to the US Congress. Federal District of Columbia has the right to choose three electors (the number of people who would represent its interests in the US Congress had it been a regular state). The electors must possess the experience and prestige needed to represent their state. Each state decides independently who will represent it in an upcoming election.

Electors are selected at party conventions in each state or they are chosen by state-level party leaders. Traditionally (but not always) electors are popular politicians or people from a presidential candidate’s inner circle. Thus, in the run-up to the Election Day, each state has two lists of electors, Democratic and Republican. With voting results on the table, the Governor signs the list of electors submitted by the party whose candidate won the state elections. These people are the ones who will elect the President. Some states enter electors’ names on ballots, others do otherwise.

The College of Electors meets on the first Monday after the second Wednesday of December following the presidential election (under the US Constitution, the election, in turn, is held on the first Tuesday after the first Monday of November in a skip year). The general meeting of electors is not convened. The electors vote in their respective states. As a rule, they support their party candidates. Deviations from this rule are quite infrequent.

US Supreme Court Sides With Trump Campaign in Ohio Voter Intimidation Lawsuit
The voting by electors from each state is determined by the formula “the winner takes all” (with the exception of two states). This means that a candidate who won the majority of votes in a state (even if the margin is insignificant) would take the votes of all electors representing the state in the College. A candidate with the majority of votes in Maine and Nebraska will have the votes of two electors plus one elector per victory in every congressional constituency of the state.

The certificate of returns is submitted to the US Congress. To win the election, the candidates must win the majority of the electors’ votes (270). If the candidates fail in this, the Congress makes recourse to an extraordinary procedure envisaged by Amendment XII (approved in 1804). Under the amendment, the President is elected by the House of Representatives from three candidates with the highest number of votes.

Inauguration is the last stage of the presidential election. The President Elect assumes office at noon on January 20 of the post-election year (Amendment XX to the Constitution).