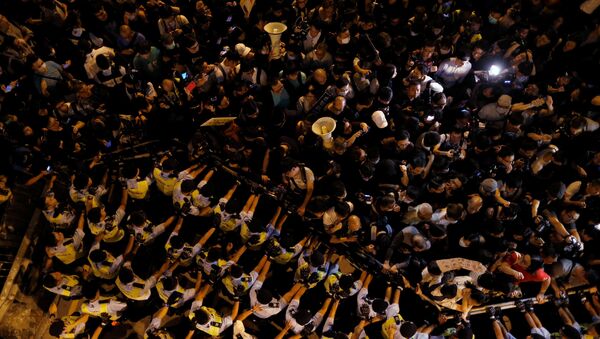 China's National People’s Congress (NPC) on Monday adopted a controversial interpretation of the Basic Law of the Hong Kong that has caused protests in the country's administrative region, local media said.

BEIJING (Sputnik) — On October 5, six Hong Kong pro-democracy activists, who were behind the September 2014 protest movements in the city and are seeking greater autonomy from China, were elected to the Legislative Council. At a swearing in ceremony on October 12, two of them refused to declare their allegiance to Beijing. This Basic Law interpretation has previously caused mass rallies in Hong Kong.

The interpretation of the Basic Law's Article 104 said that if an elected official, during the oath-taking process, violates the process accepted by law, or declines to swear in, he could not assume the office and could bear legal responsibility, the South China Morning Post newspaper reported.

The newspaper added that Leung Chun-ying, the Chief Executive of the Special Autonomous Region, said that local authorities of Hong Kong would fully implement the ruling of the NPC.

China gained sovereignty over Hong Kong in 1997 and over Macau in 1999. Both administrative regions were granted legal, economic and political autonomy from Beijing under the "one country, two systems" principle formulated by Chairman of the Central Advisory Commission of the Communist Party of China Deng Xiaoping in early 1980s.