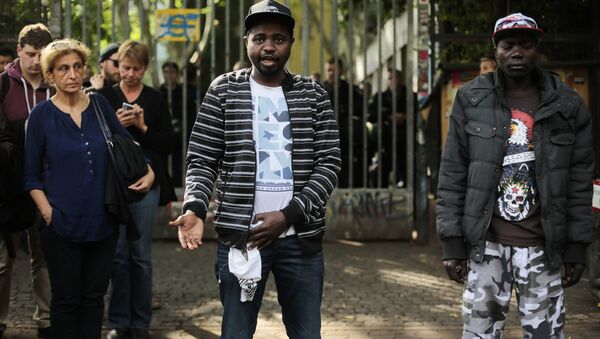 Over a million migrants arrived in Germany from the Middle East and North Africa in 2015, and stats from the German statistical service Destatis have confirmed that 138,000 German citizens left the country in search of greener pastures in the same period. Anecdotal evidence suggests many are simply fed up with the government's immigration policy.

According to calculations by Die Welt, over 1.5 million Germans, many of them well-educated specialists, have left the country over the last decade, with the outflow accelerating with the refugee crisis facilitated by Chancellor Angela Merkel's open door immigration policy.

Welcome! Germany Expects French Requests for Relocation of Calais Migrants
Meanwhile, experts have indicated that many of the country's new residents do not have any education to speak of, and that many migrants are not eager to be integrated into German society or the economy, with social conditions making them prone to crime.

The German government has begun a campaign to force some of the newcomers to leave, drafting legislation which would force those who are not eligible for asylum status to exit. But authorities' efforts to curb immigration are facing only partial success. In August, German Migration Service head Frank-Juergen Weise told local media that another 300,000 migrants were likely to arrive in the country before the year is out.

Chancellor Merkel's approval ratings have dropped to historic lows in connection with the migrant crisis, which has also led to fissures within her own Christian Democratic Union/Bavarian Christian Social Union political alliance. Last week, CSU leader Horst Seehofer warned that he might not invite Merkel to the CSU's party meeting next month, citing disagreements with the chancellor regarding immigration policy.

Russian observers have said that events appear to be degenerating into an unfortunate situation where "Germans are being turned into strangers in their own country, with no improvement to the situation anywhere in sight…The sad irony is that disenchanted Germans are being forced to leave the country because Merkel does not want to leave office. Immigrants from Germany feel a sense of hopelessness, seeing how the government destroys its own country and its history with its suicidal immigration policy."

Germany Facing Worsening Migrant Crisis as More Refugees Win Court Battles
Analysts have also warned that the rapid influx of refugees from Muslim countries is posing new demographic challenges and other problems. According to the US-based Gatestone Institute, "mass migration has – among many other problems –contributed to a growing sense of insecurity in Germany, which is facing a spike in migrant crime, including an epidemic of rapes and sexual assaults. Mass migration is also accelerating the Islamization of Germans. Many Germans appear to be losing hope about the future direction of their country."

Meanwhile, the country's new residents have fortified their positions. Last week, it was reported that thousands of migrants have taken the Federal Migration Office to court for granting them a qualified asylum, rather than full refugee status.

Earlier this month, an 18-year-old Syrian refugee caused widespread social discussion after writing an op-ed in a major German weekly, calling on those who don't agree with the government's refugee policy to get out of the country. "We refugees are fed up over the angry citizens (Wutburger)," he wrote. "We refugees…do not want to live in the same country with you. You can, and I think you should, leave Germany. And please take Saxony and Alternative for Germany [AfD] with you."

Over the past two years, supporters of Chancellor Merkel's immigration policy have defended it by saying that it was necessary, above all, to give refugees a 'sense of hope.' Now, with frustrated Germans fed up with the migrant crisis leaving the country en masse, the question that naturally arises is: which political forces inside the country will campaign on returning hope to German citizens?