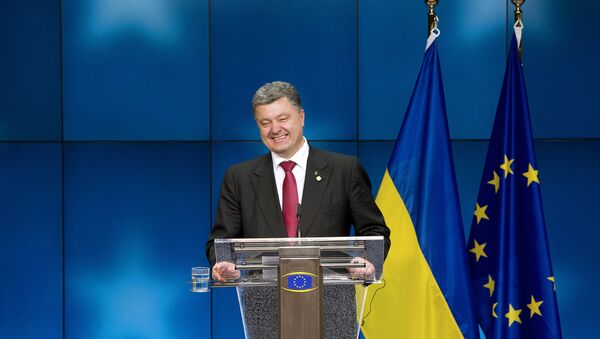 © AFP 2023 / ALAIN JOCARD
Subscribe
International
India
Africa
According to the Ukrainian President, Ukraine allegedly does not have any secret agreements with western countries on implementation of the Minsk accords.

“The first myth is that there are some secret agreements on Minsk [accords] that are still unknown to the public or to our partners. I want to strongly dismiss that. That is an unnatural style of the European diplomacy,” Poroshenko told the Ukrainian television broadcasters in an interview.

Kiev Remains Committed to Minsk Accords But Not Against Ukraine's Interests
He also pointed out that the Minsk agreements are the only way to solve the conflict in the eastern Ukrainian region of Donbas.

“There are also other myths that Minsk [agreements] had exhausted themselves and that there is allegedly another alternative. I point out that today Minsk is the only way to peace,” Poroshenko added.

In April 2014, Kiev authorities launched a military operation against pro-independence militia in Donbas. In February 2015, the two sides reached a ceasefire deal after talks brokered by the leaders of Russia, France, Germany and Ukraine — the so-called Normandy Format — in the Belarusian capital of Minsk.