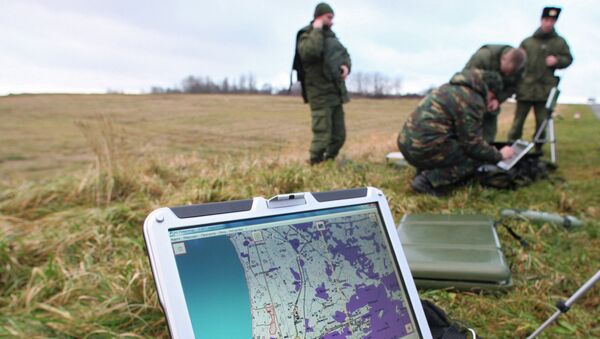 © Sputnik / Igor Zarembo
/
Go to the photo bank
Subscribe
Russian paratroopers are now able to set up video links between themselves and even can hold secret videoconferences involving dozens of participants thousands of kilometers apart by using a dedicated messenger service successfully tested during the Caucasus-2016 military exercise earlier this year, Izvestia reported.

The “paratroop messenger” is more than just an online cinema, it is a means of troop control, that's why it is accessible to the Russian military alone,  is 100-percent hack-proof and functions separately from civilian networks.

“The new video communications program, which is part of the Andromeda-D automatic control system, is currently being introduced in the Russian Paratroop Forces” a Defense Ministry representative told the newspaper.

He added that the new software is available on officers’ computer notebooks and tablets from battalion commanders and up. In practice, however, even company and platoon commanders were able to latch on whenever necessary. The program can also be used for videoconferencing purposes.

Russia's Rostec Develops Messenger for Companies, State Agencies - Official
According to Izvestia, the new messenger is 100-percent indigenous and is based on the Astra Linux operational system developed by RusBITex company for military use and which has been tested as part of the Andromeda-D system since 2012.

The United States is currently a world leader in the field of military video communications. The 2001 invasion of Afghanistan was the first military operation ever to be entirely planned using video conferences.

The Pentagon thus managed to synchronize the work of several headquarters handling the operation located as far apart as Florida, Kazakhstan, Uzbekistan and Masira Island in Oman.

During Operation Iraqi Freedom in 2003 the Americans had entire companies equipped with satellite and radio relay communications gear tasked with ensuring real-time video linkups. Each of the US Armed Forces’ five service branches now has a video messenger of its own.

Not to be outdone, the Russian MoD is now all set to have similar video messengers in place in the Russian Armed Forces, and the Paratroops have been the first to get one.