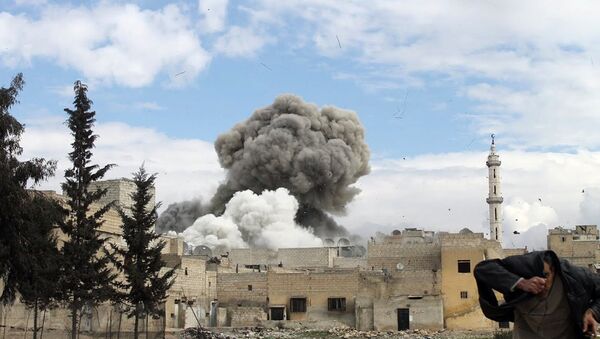 Finian Cunningham
All materials
This could explain why NATO governments have been so anxious in recent weeks to halt the Syrian-Russian offensive on Aleppo. Could it be that they need to extricate their special forces embedded with terrorist-dominated militants?

Imagine the world headlines that not even compliant Western news media could suppress if the Syrian army with Russian air support liberated the last redoubt of al-Nusra Front only to find among the defeated jihadists professional troops belonging to the US, Britain, France or some other NATO member.

Washington and its Western allies who proclaim to be fighting terrorists and “only” supporting “moderate rebels” would be caught with their hands deep inside the cookie jar, so to speak. Embarrassing, to say the least, to have such a honeyed-lie exposed in glaring reality.

Daesh Launches Offensive on Kurds in Aleppo After Alleged Coalition Airstrike
There’s something decidedly eerie about the current situation in the northern battleground city of Aleppo. On Tuesday night, a NATO air strike was reported on the village of Hassajek, near the city, in which at least six people – believed to be civilians – were killed. The Russian government says the strike was carried out by two Belgian F-16s fighter jets. What was that about? And why the silence from Washington and NATO over such a flagrant violation? Is somebody getting nervous?

Then the day before the humanitarian pause declared by Syrian and Russian forces came into effect on Thursday, sources in Aleppo told how busloads of militants had already begun leaving the city. Significantly, some of the vehicles had blacked-out windows. Syrian sources say that the passengers on those buses were not foreign jihadists, but rather were special forces from NATO countries. That claim has not been verified.

There are long-held suspicions that anti-government militants holding east Aleppo under siege for the past four years have been receiving covert, direct support from NATO special forces. It has been well-documented that NATO governments have been arming and training militants in waging a war for regime change in Syria. Therefore, it would be plausible that NATO commandos would actually be on the ground in militant-held ghettos of Aleppo.

Terrorists Execute Residents Attempting to Leave E Aleppo - Russian Gen Staff
Some further reasons for suspecting this direct form of Western involvement are the following: the so-called Aleppo Media Center (AMC), which is funded by the US, British and French governments, has suddenly become a crucial source of stylized propaganda for Western officials and media accusing Russia and its Syrian ally of war crimes.

Western media routinely use video footage supplied by the AMC purporting to show the aftermath of Russian and Syrian airstrikes. The AMC is described as an “amateur”, “activist” source. But its information appears to be anything but amateurish. The footage is often obtained from aerial drones flying high above bombed-out buildings. What kind of “amateur” has access to such sophisticated technology, and, furthermore, able to operate it? That suggests that the AMC is receiving professional technical support to run an information war. Since NATO countries are known to heavily fund the unit, then it’s reasonable to think that those countries also supply supporting personnel.

A second pointer to NATO troops being on the ground in Aleppo stems from the recent assessment by Lt General Sergei Rudskoy of the Russian General Staff, which found that militants in east Aleppo are receiving hi-tech modern weaponry, in particular US-made TOW anti-tank missiles. As with the above drone technology, it seems reasonable to assume that NATO personnel would more than likely have to be present in order to train militants in deploying these sophisticated weapons.

West, Ukraine Block Russia's UNSC Draft on Separating Syrian Rebels, Terrorists
US President Barack Obama announced months ago that hundreds of his special forces were sent to Syria. There are also credible reports of British and French elite troops already present. It is doubtful that their mission is according to the official claim of “training rebels to fight terrorists”.

Residents of Aleppo recount that when their city first came under siege in 2012, the militants were noticeably foreign and acted like an externally-directed mercenary army. They believe that Aleppo has been used ever since as a center of operations to orchestrate the entire Syrian war. Such a major undertaking suggests that the primary foreign drivers of the regime-change war, that is NATO members, must have also had their personnel present in the Aleppo de facto center of operations.

A third factor in suspecting NATO personnel being embedded in Aleppo is the near-apoplectic response from US, British and French officials over the past three weeks. Since the breakdown of the ceasefire late last month and the resumption of a determined offensive by Syria and Russia to fully capture Aleppo, Western governments and media have launched an unprecedented campaign to stall the anti-terror advance. This campaign has been couched in “humanitarian concern” and alleged “war crimes”.

US State Department Unaware of Humanitarian Corridors in Syria’s Aleppo
But such Western concern seems contrived given the apparent lack of similar concern with regard to humanitarian suffering that has prevailed in Yemen, where a US-backed Saudi aerial bombardment has killed thousands of civilians over the past 19 months.

No, there seems to be another, more desperate motive for the West to mount such a vigorous effort to derail what is otherwise a very effective Syrian and Russian military operation to liberate east Aleppo from a reign of terror. And that motive would be more than just the unspoken need for the West to salvage its terrorist proxy army of Nusra and other jihadi brigades.

Admittedly, this is conjecture, but the paramount motive for the NATO members is to prevent the discovery of special forces among the terrorist hold-outs. Or at the very least, the discovery of highly incriminating evidence of NATO weapons, equipment, command and control logistics.

Russia and Syria this week agreed to implement a temporary ceasefire as a sign of goodwill in order for civilians to gain humanitarian access and leave the besieged part of Aleppo. Russia has also repeated its earlier demand that the truce must be used as an opportunity for alleged Western-backed rebels to separate from al Qaeda-linked extremists. Surrendering militants are to be given safe passage out of Aleppo, as part of the arrangement.

Moscow Counting on Partners to Get Militants to Leave Aleppo
Moscow has further warned that those insurgents who choose to remain in east Aleppo will be dealt with harshly when military operations resume, presumably later this week.

But the big question is: who exactly are the militants boarding those buses out of Aleppo?

It is believed that they are being given corridor to decamp in neighboring Idlib province. Idlib is known to be a stronghold for the Nusra terror network.

Of course, the implementation of a truce this week is good politics by Syria and Russia to demonstrate humanitarian care for those civilians trapped in Aleppo as human shields.

However, it is incumbent on the Syrian and Russian authorities to carefully screen those militants who emerge from Aleppo this week.

Otherwise, the battle for Aleppo could prove to be a shortfall victory – if the militants simply exploit the cover of “moderate” to set up another base of operations in Idlib, along with their NATO handlers.