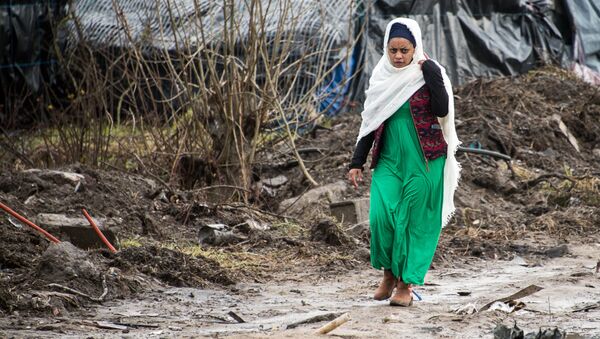 © AFP 2021 / Denis Charlet
Subscribe
A translator working with a French TV journalist has reportedly been raped in the notorious “Jungle” refugee and migrant camp outside the city of Calais.

The incident happened on the outskirts of the camp between 2 and 3:00 AM, when three Pashto-speaking individuals thought to be Afghan migrants threatened the translator and the journalist with knives, looking to steal their equipment. One of the group then raped the translator, a native of Afghanistan who lives in Paris, at knifepoint, while the others held her companion.

After the attack, the pair escaped or were let go, and went to the Calais police station and a local hospital.

The 38-year-old translator and the 42-year-old France 5 journalist were described as "an experienced team," that had been working in the camp for several months on a documentary about unaccompanied children.

Local prosecutors say a police case has been opened and that DNA samples were taken from the victim to help identify her attacker.

A July census concluded that some 7,300 people were living in the camp, including 761 minors, more than 80% of whom are not accompanied by an adult.

The migrants have come from Afghanistan, Africa and the Middle East in hopes of reaching the UK, just across the English Channel from the port city of Calais, and have become stuck, waiting for slow-moving asylum or immigration processing. Security is minimal and living conditions are described as squalid. Crime and violence, including sexual violence, is frequent.

In September, French Prime Minister François Hollande promised to close the camp "within weeks" and move residents to "reception centers" around the country. Those not eligible for asylum are to be deported.

In an October 14 statement, the UN said it welcomed the decision to close the camp, but stressed the importance of finding proper accommodation for its residents. The site has been problematic for years, said Adrian Edwards, spokesperson for Office of the UN High Commissioner for Refugees, with "appalling" living conditions and poor security.

000000
Popular comments
You enter the jungle your gonna get treated like animals ....... Now maybe these free spirited women will understand what the rest of us already know.......... Keep your distance and stay away from them...... Ignore them and stay with your own kind .........you will never have a problem ......