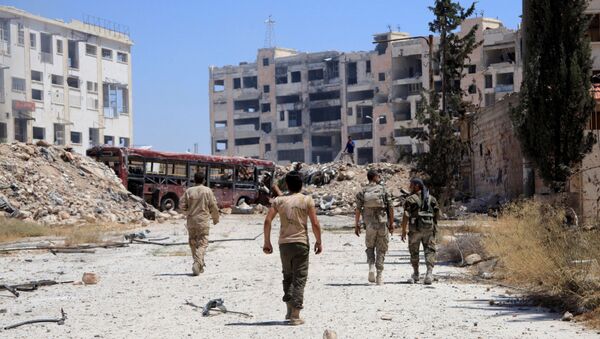 © AFP 2021 / GEORGE OURFALIAN
Subscribe
The Russian Defense Minister said the halted airstrikes would ensure the safe passage of civilians from eastern Aleppo along six corridors, and the evacuation of the sick and the wounded, to prepare for the so-called humanitarian pause on October 20.

UN Welcomes Humanitarian Pause Announced by Russia in Syria’s Aleppo
Earlier, the Russian General Staff has announced a humanitarian pause around Syria's besieged city of Aleppo from 08:00 to 16:00 local time.

According to Rudskoy, the militants could use two secure corridors to leave eastern Aleppo heading to Idlib.

Defense Minister Sergei Shoigu said that Russia appeals to countries with influence over rebels in the eastern part of the Syrian city of Aleppo to persuade them to leave.

"We appeal to the leadership of countries that have influence on the armed groups in eastern Aleppo with a proposal to persuade their leaders to cease hostilities and to leave the city," Shoigu said at the ministry's select session.

All those interested in stabilizing the crisis in the Syrian city of Aleppo need to engage politically instead of dragging their feet, Shoigu added.

"Anyone who is really interested in the early stabilization of the situation in the city of Aleppo need to embark on real political steps without continuing with political red tape," Shoigu told reporters at a select Defense Ministry session.