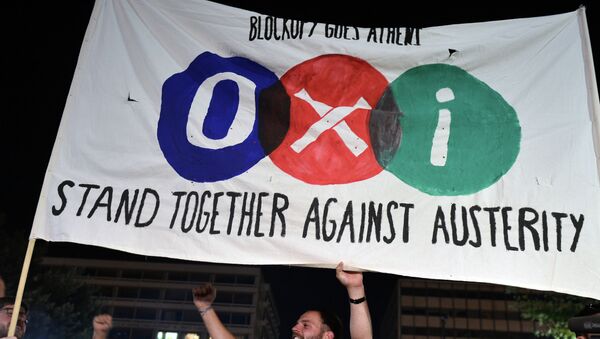 © AFP 2021 / Louisa Gouliamaki
Subscribe
Negotiators from the European Union and the International Monetary Fund (IMF) return to Athens this week to negotiate the next round of controversial reforms to unlock the next tranche of bailout cash with both the EU and the IMF at odds over the practicality of the bailout terms.

Greece was forced to pass legislation on tax and pension reform, as well as other issues, a part of its bailout agreement. The reforms included "streamlining the VAT system and broadening the tax base to increase revenue" and "up-front measures to improve long-term sustainability of the pension system as part of a comprehensive pension reform program."

The demands include passing a law immediately scrapping Greece's generous early retirement age and raising the statutory retirement age to 67 years or 62 years with 40 years of work, from 2022 and amendments to legislation in order to collect this year's payments of the hated ENFIA property tax.

However, the IMF has refused to take part in the third bailout, saying the terms of the deal are "unsustainable." There is massive opposition to the terms of austerity being imposed on Greece by Brussels and there are frequent demonstrations against the cutbacks in public spending.

In its latest report into the Greek economy, the IMF said: "Recurrent political crises and confidence shocks associated with the inability to sustain the reform effort resulted in a high cost for society, with output having declined by 25 percent and still stagnating, and unemployment and poverty rates remaining much higher than before the crisis.

"Moreover, the income tax reform has not tackled Greece's very generous tax credit, which allows more than half of wage earners to be exempt from income taxes (compared to 8 percent in the euro-zone). Such exceptionally generous exemptions for the middle-class are difficult to justify with social-fairness arguments, as they forego the revenues needed to protect the most vulnerable through welfare and unemployment benefits that are common elsewhere in Europe," the IMF report said.

1000s of Greeks refuse to accept inheritances because they can't afford the inheritance tax #austerity #success_story
.

Meanwhile, lawmakers in the European Parliament have accused the Greek Government of "double dealing" over its bailout terms.

"The Tsipras government is playing with fire. Reforms have been only half-heartedly implemented. And Tsipras is playing a blame game. The next tranche of money from the creditors should only be released if substantial progress is made in a number of areas, including in particular the energy sector. The labor market also needs structural reforms," said Burkhard Balz MEP, EPP Group Spokesman in the European Parliament's Committee on Economic and Monetary Affairs.