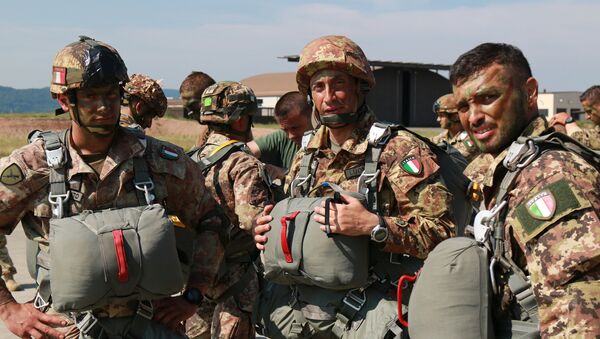 © Flickr / 7th Army Training Command
Subscribe
An announcement that Italy is sending troops to join a NATO mission in Latvia is "an alarming sign" because the Alliance continues its approach towards Russia's border, Tancredi Turco, member of the Italian national parliament, who is currently visiting Russia's Crimea, told Sputnik on Saturday.

Latvia to Host Exercises Involving Troops From NATO States in October
YALTA (Sputnik) – On Friday, Italian Defense Minister Roberta Pinotti said that Italy remained committed to a dialogue with Russia, adding that Rome would deploy some 140 troops to Latvia in 2018, as it was announced at the NATO summit in July.

"I think it is a very alarming sign as NATO is getting closer to the Russian border. The fact that I am here today proves that I do not want confrontation and escalation of the situation," Turco said.

He added that diplomacy should be the only tool to solve the issues in the world.

NATO has been boosting its military presence in Europe, particularly in Eastern European states, since the outbreak of the Ukrainian crisis, citing Russia's alleged interference in that conflict, as well as Crimea's reunification with Russia, as justification for the move.

At the NATO summit in Warsaw on July 8, the Alliance's secretary general, Jens Stoltenberg, said that the military bloc would strengthen its presence in Eastern Europe on a rotational basis with four battalions in Poland and in the Baltic nations.