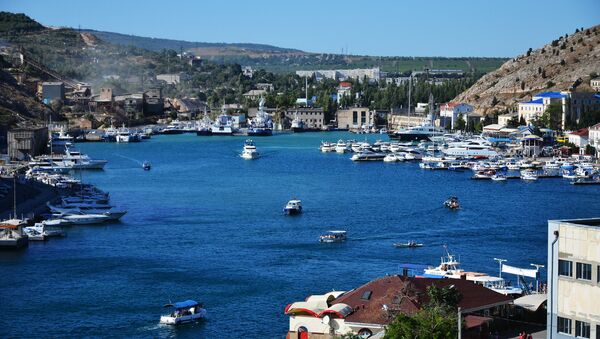 © Sputnik / Vladimir Sergeev
/
Go to the photo bank
Subscribe
The Crimean authorities invite Italian entrepreneurs, who are currently visiting the peninsula, to invest in developing marina in the Crimean town of Balaklava, farming oysters and participate in the urban planning of the region, the head of the department of priority projects for development of Sevastopol said Saturday.

"I want to inform you that we have Free Economic Zone that presents ideal conditions for investment. In regard to marina, we are very much interested in modern technologies in terms of marina development, because we are certain that we will find a niche of our own in the Mediterranean community as soon as sanctions are lifted. I also want to compliment the Italian architects and add that the Crimean cities will only win if Italian architects get a chance to work here," Sergey Gradirovskiy said at a meeting with the Italian businessmen.

The speaker added that Crimea presented ideal conditions for farming oysters and invited the Italian entrepreneurs to bring their business to Crimea.

Gradirovskiy also invited suppliers and partners from Italy to follow in the footsteps of wine producers from France who in July, while visiting Crimea, announced their intention to set up a joint venture on the Peninsula.