EU to Britain: You Can Have Hard Brexit or No Brexit 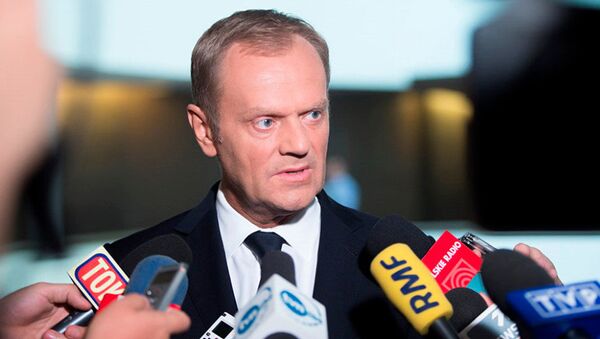 © Flickr / Kancelaria Premiera
Subscribe
European Union chief Donald Tusk has issued a stark warning to the UK that there will be no compromise of EU principles in negotiating Britain's departure from the EU. Tusk said that if the UK wishes to avoid the economic stresses that could be associated with a severe exit from the EU, the only option is to give up on Brexit all together.

It was an astonishing proposition laid out by Mr. Tusk on Thursday.

Speaking to policymakers in Brussels, Tusk insisted that it was pointless for British legislators and businesses to speculate about a so-called soft Brexit, in which the UK would be allowed to remain a member of the EU single market.

"The only real alternative to a hard Brexit is no Brexit, even if today hardly anyone believes in such a possibility."

Mr. Tusk added that the pro-Brexit campaign leader's promise to "take back control" from the EU had "definitive consequences" for the UK now that campaign has won.

The essence of Brexit as defined in the UK referendum campaign means radically loosening relations with the EU, a de facto "hard Brexit"

As President of the EU Council, Mr. Tusk will be the chair of all summits between EU leaders to discuss Brexit negotiations. He said there could be "no compromises" on the key EU principle that benefits such as access to the single market must come with the free movement of people.

This is the sticking point: anti-immigration sentiment is widely believed to have paid a key part in influencing many British voters to choose to leave the EU in the first place.

Addressing the Conservative party conference in Birmingham earlier this month, May acknowledged how influential the issue of immigration is to ongoing Brexit strategy discussions:

"Let me be clear. We are not leaving the European Union only to give up control of immigration again."

However, Tusk's ultimatum will be taken as a damning blow to the many business leaders and politicians who have continued to insist, since the Brexit referendum on June 23rd, that the UK should retain strong trade ties with the EU.

Hugely saddened by EU'S Donald Tusk looking for a confrontational 'HARD' BREXIT! So be it!

The single market in particular is an extremely lucrative customs union, which allows the free movement of goods and services across borders without the imposition of costly tariffs.

Warning UK Gov't 'Windfall Tax' Will Kill Off London Businesses
Prime Minister Theresa May has herself indicated that she may already understand that the UK could be barred from retaining its access to the single market. Under pressure during Prime Minister's Questions on Wednesday, May refused to answer Labour leader Jeremy Corbyn's question on whether access to the single market was a "red line" for the Government. Obfuscating, she would only be pressed to say she would seek the "maximum possible access."

Her caution hasn't stopped several of her own senior cabinet ministers from publicly insisting that the UK will be able to both restrict the freedom of movement of EU nationals in the UK and stay within the single market.

Foreign Secretary Boris Johnson, who spearheaded the campaign to leave the EU, pithily summed up his negotiating position as "having cake and eating it."

"To all who believe in it, I propose a simple experiment. Buy a cake, eat it, and see if it is still there on the plate."

He continued with the bizarre food trope, adding that the prospect of losing the UK is so bitter for many Europeans, the Brexit process will leave everyone with a bitter taste in their mouth.

"There will be no cake from the table for anyone, there will only be salt and vinegar."

My speech at the EPC 20th anniversary conference: " The EU at Sixty: Unity or polarisation?" https://t.co/cjIrsnkfBa #epc20 pic.twitter.com/SasXgX4al1

The stakes over Britain leaving the EU have been raised, and there is widespread alarm that the UK's economy may be significantly damaged by the process of extricating itself from the myriad of complex EU legislation and trade deals currently in place.

However, several Eurosceptic MPs have dismissed such fears as being overblown. International Trade Secretary Liam Fox has claimed that many countries outside the EU are happy to negotiate positive trade deals with the UK.

"The countries with which the EU has a free trade agreement already, Mexico, [South] Korea for example — some countries have been indicating to us they would simply rather have a treaty roll over at one minute past midnight into a UK treaty of exactly the same status and with exactly the same content," Mr. Fox said earlier this month.

"If that were to happen, that's a minimal renegotiation, that's an exchange of letters probably."

The EU's next summit meeting will be on October 20-21 in Brussels. Mr. Tusk, who will be chairing the meeting, has already said that the Brexit negotiations will be "in the first instance, painful for Britons." His EU colleagues are expected to discuss just how painful the process could be for the remaining members of the 27-nation bloc.