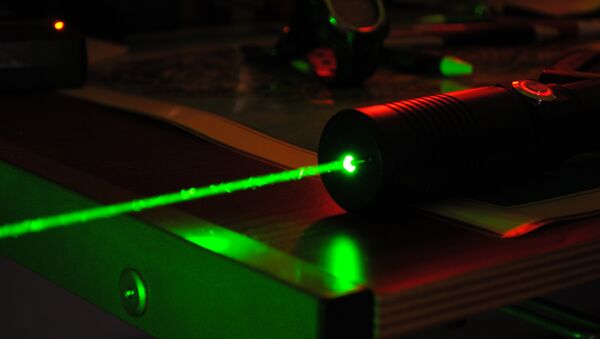 First radio-electronic weapons samples based on new physical principles (beam, geophysical, wave, kinetic and other types of weapons) have been first unveiled at the closed Russian Defense Ministry exhibition on the sidelines of the Army-2016 forum last month.

"Working models of these weapons have been already developed and proved their effectiveness. This is a completely new type of weapon that has no equals either in this country or anywhere else in the world," the UIC spokesperson said.

He added that the new weapons can strike targets without the use of ammunition — instead, a directed energy beam is used.

Laser Power: Russia Develops Energy Beam for Satellite Refueling
“With its effective range apparently not exceeding one kilometer, this weapon may be used against UAVs flying right above the battlefield,”

Korotchenko said, adding that similar weapons were currently being developed also in the US and other countries. Military political analyst Alexander Perendzhiyev said that the new weapon is especially effective against systems with microelectronic elements.

“It is effective because there is no way you can hide from an electronic wave. This is a kind of weapon that is meant to disarm the enemy,” he said.

It is especially effective when used against hi-tech microelectronic systems.

“For example, if you have an electronic system of loading a projectile, the interference caused by this new weapon can make sure that the projectile explodes before it is fired destroying the enemy plane, drone, whatever,” Alexander Perendzhiyev noted.

He added that radio-electronic impulses can also be used against the enemy manpower.

“The impact of such waves can be deadly to humans,” he said, adding that radio-electronic weapons can also be used against terrorists.

Russia
Work on Laser, Particle-Beam Weapons Underway - Advanced Research Fund
"Trying to flush out terrorists holed up inside a house or an apartment is one thing, and destroying them right inside with an electronic impulse is another. Here we are talking about armed people with some kind of electronic equipment on them, such as a portable radio station. At least you can try to destroy hand grenades, artillery shells and submachineguns. I’m not saying that we already have all things ready to go. We are still working on them,” Perendzhiyev said.

The prototypes of radio-electronic weapons based on new physical principles were unveiled during a closed-door demonstration for Defense Ministry officials on the sidelines of the Army-2016 military technology expo in September.