Crisis in Haiti: 1.4 Million People in Need of Aid in Wake of Hurricane Matthew 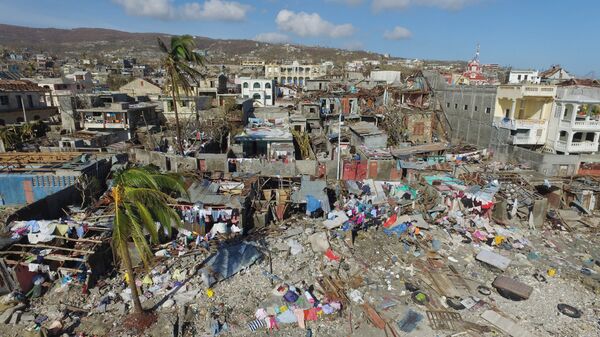 The United Nations has pledged $120 million in aid to Haiti after the impoverished country was devastated last week by the storm, with 1.4 million residents in need of assistance.

US Death Toll Climbs To More Than 35 After Hurricane Matthew Amid Massive Floods
Nearly 1,000 people were killed in the islandnation, and the count is expected to rise as relief workers attempt to reach all areas. Those who survived are surrounded by chaos and destruction, which the UN has said requires a “massive response” from the international community.

"Some towns and villages have been almost wiped off the map," UN Secretary-General Ban Ki-moon told reporters.

The UN’s Under-Secretary-General for Humanitarian Affairs, Stephen O'Brien, has added that the damage is the worst humanitarian crisis since  the 2010 earthquake, which left much of the nation in a shambles.

"Hundreds have died; at least 1.4 million people need assistance at this time; some towns and villages have been almost wiped off the map; crops and food reserves have been destroyed. At least 300 schools have been damaged,” O’Brien told reporters.

“These numbers and needs are growing as more affected areas are reached. Tensions are already mounting as people await help. A massive response is required. UN teams are working with local officials to assess needs,” he said.

When the Category 4 hurricane struck Haiti on October 4, homes were completely leveled, livestock was killed in the wind and flooding, and water sources were polluted. Approximately 300,000 residents remain in shelters, which are low on supplies due to difficult transport conditions on damaged roads.

Haiti Could Face Famine in Three Months in Wake of Hurricane Matthew
Prior to the storm, the nation was struggling with an outbreak of cholera, which the unhealthy water and poor sanitation brought by the hurricane have exacerbated.

“In 2016 almost 27,000 cholera cases have been reported in Haiti, and over 240 people have died,” the UN's Central Emergency Response Fund said in a statement last week. "Hurricane Matthew is feared to significantly worsen the situation and increase the risk of a larger outbreak."

The $120-million pledge from the UN is aimed at covering the needs of the nation for the next three months.

“The United Nations is mobilizing across all fronts to support the people, the Government and local groups such as the Red Cross in getting recovery under way as quickly as possible. I call on the international community to show solidarity and generosity – and to work together effectively in responding to this emergency,” O’Brien said.