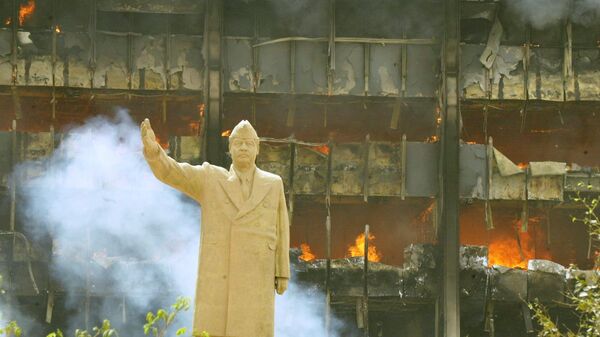 A wave of uprisings swept across northern Africa and the Middle East in early 2011: regimes were changed, conflicts were stoked. Sputnik’s Brian Becker discussed this violent cultural evolution with author Vijay Prashad, whose new book is titled The Death of the Nation and the Future of the Arab Revolution.

To understand the nature of the ongoing violence in the Middle East, it is useful to remember that the region has long been the arena for a standoff between two major blocks of powers, Prashad explained on Radio Sputnik’s Loud & Clear.

Syria as Vietnam or Afghanistan: US Unlikely to Risk War With Russia
Following the Industrial Revolution, cultural and military incursions in the region predominantly consisted of monarchies led by Western nations cultivating their so-called third world project in the Middle East, in attempts to create regional powers carefully subordinated to Western principles.

The second wave of influence was led by the Soviet Union, acting through the United Nations, and a network of alliances to counterbalance the influence of the West.

“There was a deep contest between the various forces in the region,” including communists backed by the Soviets on the one side, and monarchies (the UAE, Saudi Arabia) backed by France and the US, and the UK on the other, Prashad said.

“The US and the UK made their way mainly through [the use of] coup d'états,” the historian stated, pointing out that “it was impossible [for England and America] to start full-scale land invasions with their guns blazing” because of strong Soviet opposition.

US Considering Arming Syrian Rebels, Evoking 'Afghanistan Scenario'
A radical change occurred in the 1980s, when the USSR was at the threshold of collapse, with third-world countries hit by a debt crisis. During that period, the historian noted, the US instigated a new, creative methodology for regime change.

US policymakers, in creating a concept they termed “rogue states,” suggested that those countries that were “not willing to abide by new free trade protocols, abide by US power, that wouldn’t sign bilateral military agreements with Washington,” would be overthrown.

A concept of liberal intervention, resting on an idea that countries not lining up for western-defined “human rights” could be invaded and destroyed, was then inculcated.

“[The] Panama [invasion by the US in 1989] was the test case for massive-scale regime change, destruction of institutions and creation of countries in your own image,” the author said, explaining that the Panamanian invasion was the first time Washington sent Special Forces to arrest a leader of a sovereign nation. “This was the new mode of dealing with somebody.”

“Regime change is a specific kind of ‘destroying a country,’” Prashad asserted. “In a sense, it’s not enough to overthrow a leader, to conduct a CIA-coup, but, to destroy the state institutions to create tabula rasa, so they could make your own country in that place.”

Nuclear Poker: Why the US Can't Trick Russia Into Changing Its Nuclear Doctrine
“Iraq is terrific example of this,” Prashad said, citing the 1991 and 2003 wars. When Americans arrived to Iraq in the 2000s, they believed that “they created [a] neo-liberal paradise where there are no regulations when the oil flows freely.”

The regime change concept, now proven to be lethally successful, was then exercised in the Middle East and North Africa. In the wake of the Arab Spring, a wave of revolutions that rocked the region in 2011, countries including Libya and Syria were effectively destroyed.

Prashad pointed out that the overthrow of governments in the Middle East marked the end of the pan-Arab movement and the death of secular nationalism. Now, the Arab world sees “too many impediments for a proper new future,” resulting in an “Arab world lost for progressive forces.”