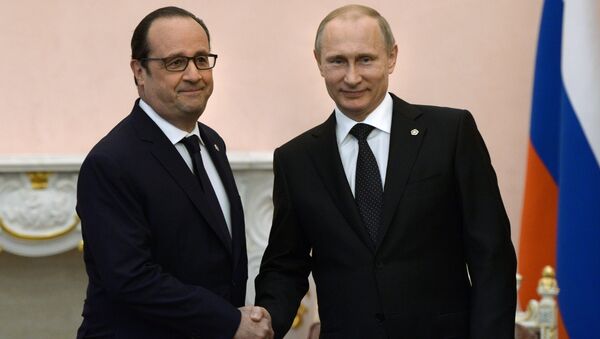 Hollande Slams Russia's Veto of France's UNSC Resolution on Syria
MOSCOW (Sputnik) — The October 19 visit was announced last week by Russian Foreign Minister Sergey Lavrov at a meeting with his French counterpart Jean-Marc Ayrault. Lavrov told reporters that Ukraine and Syria would be atop the agenda.

The surprise cancellation comes two days after French President Francois Hollande questioned the usefulness of the meeting with Putin, in an interview with a French TV channel, citing bombardments of Syria’s Aleppo.

France has blamed Russia for not reigning in the Syrian government, who has been attacking militant hideouts in the northern city, where around 250,000 were estimated to live under siege.

Speaking at a press briefing, Russian president’s spokesman Dmitry Peskov said that Vladimir Putin had decided to cancel next week’s trip to France after some of the scheduled events were "dropped out of the program."

Asked about the cause for these changes, Peskov replied, "This is a question for the French side." President Putin was expected to attend the opening of a Russian cultural and spiritual center and an exhibition.

Hollande, who was speaking in Strasbourg, said he had told Putin ahead of the cancellation that the talks would be confined to the Syrian problem and Syria alone.

Peskov added that Putin was ready to come to Paris for talks with his French opposite number "when it would be comfortable for President Hollande."

"Therefore, we will wait when this comfortable time comes, and the President will again consider the possibility of making this visit if the issue will be on the agenda," he continued.

He defied claims that the Russian leader was being isolated from the rest of the world, saying "the busy schedule of the president [Putin] evidences the contrary."

In his turn, President Francois Hollande reaffirmed his willingness to meet with Russia’s Vladimir Putin whenever the latter was ready for it.

Hollande Says Ready to Meet Putin Whenever Moscow Sees Fit
"I am convinced that we have profound need for dialogue with Russia. However, this dialogue must be both firm and honest otherwise it’s pointless, it’s a sham. This is why I would like to reiterate my willingness to meet President Putin whenever he deems necessary," Hollande said.

The French leader emphasized that he and Putin had a duty to promote peace in Syria and did not rule out that opportunities for dialogue with Moscow could present themselves.

"I am already to continue the dialogue on Syria. He [Putin] decided to delay the visit but it will not prevent us from using other opportunities for a discussion on this," Hollande said.

Russia has been at odds with the US-led coalition fighting Daesh militants in Syria, specifically over Aleppo hostilities. Moscow denies attacking civilians trapped in the city and insists it is only targeting Daesh and al-Qaeda linked al-Nusra Front fighters.