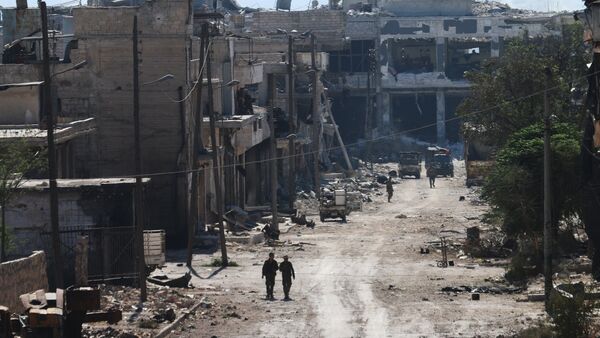 Washington's anti-Russian strategy in Syria includes support for anti-Assad terrorist forces as well as PR and information attacks on Moscow.

At the same time, he said that the US is providing assistance to some of the Syrian moderate groups fighting the Syrian Army.

Washington is unable to separate the so-called moderate rebels from al-Nusra Front terrorists. If the moderates received man-portable air defense systems this would increase the risks for the Syrian Air Force and Russian combat aircraft, an article in the Russian newspaper Nezavisimaya Gazeta read.

Last week, US State Department spokesman John Kirby has made strong statements regarding Russia’s involvement in Syria, claiming that if Russia will not cooperate with the US, Moscow will keep sending troops home in "body bags."

Moscow delivered a firm response to Kirby’s words. The Russian Foreign Ministry perceived the statement as a threat.

Western Sanctions Threats Against Russia 'Paralyze Diplomacy' in Syrian Crisis
Russian Defense Ministry spokesperson Igor Konashenkov responded to Kirby's statements, saying, "Concerning Kirby's threat about the possible loss of Russian aircraft, and sending Russian soldiers home 'in body bags,' I will say that we are well informed on where in Syria, including in Aleppo Province, and exactly how many 'unadvertised' specialists are engaged in operational planning and commanding the militants."

An attack by the US-led international coalition on the Syrian Army near Deir ez-Zor solidifies the assumption that the US is supporting terrorists fighting against Syrian President Bashar Assad, the article read.

On September 17, US warplanes attacked Syrian government forces near the eastern city of Deir ez-Zor, leaving 62 military personnel killed. The Pentagon said initially that the airstrike was a mistake and targeted Daesh militants.

Another interesting fact is that right after the attack Daesh militants launched an offensive against Syrian forces, according to the article.

Moreover, the Syrian intelligence agency obtained an audio recording between Daesh militants and US military prior to the attack.

US Suspends Cooperation With Russia on Syria Amid Violence in Arab Country
According to Syrian lawmaker Muhammad Kheir Al-Akkam, the audio recording proves that the attack was preplanned and was not made by mistake.

"Now, the key point is that the airstrikes were preplanned in coordination with Daesh. It was no surprise that right after the attack Daesh launched an offensive," Al-Akkam told Sputnik.

He added that the recording proves that Washington "directly and indirectly supports terrorists in Syria."

The airstrikes came amid a US-Russia brokered ceasefire across Syria. The author suggested that it is obvious that the truce was used by US-sponsored groups to regroup and restore combat power.

According to the article, all these facts show that Washington is waging a "surrogate war" against Russia in Syria.

UNSC Meeting on Syria is 'Another Information Attack Against Russia'
In addition to supporting terrorists and sabotaging peaceful efforts, Washington is utilizing information attacks against Moscow.

Several days later, an attack on a UN/Syrian Arab Red Crescent (SARC) convoy was attacked in Syria. The convoy was carrying humanitarian aid for Aleppo Province. The attacks killed 20 civilians and an aid worker and destroyed 18 trucks.

Soon after the convoy was attacked, Washington accused the Russian military and the Syrian Army of the attack. In turn, the Russian Foreign Ministry denied on Tuesday any involvement of Russian or Syrian combat aircraft in the attack.