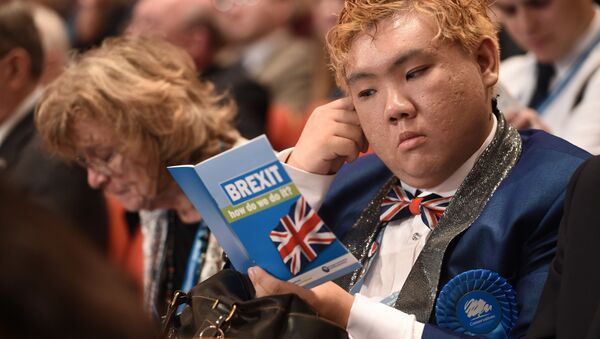 © AFP 2021 / Oli Scarff
Subscribe
UK exporters could retain access to the bloc's tariff-free single market through trade agreements separate from London-Brussels negotiations on the United Kingdom's exit from the union.

Full English Brexit: Welsh Tory Leader Gets Eggs on Face Over Speech Gaffe
MOSCOW (Sputnik) — UK companies exporting to the European Union could retain access to the bloc's tariff-free single market through trade agreements separate from London-Brussels negotiations on the United Kingdom's exit from the union, Janice Atkinson, a British independent member of the European Parliament and Vice-Chair of Europe of Nations and Freedom Group, told Sputnik on Tuesday.

"Access to the single market actually means that the EU is accepting us [Britain] accepting the jurisdiction over domestic technical standards. And what the EU has to recognize is that only 6 percent of the British companies actually export to the EU. So what we could do is having agreements with those companies that actually export to the EU. Maybe they will have to comply with the [EU] standards," Atkinson said.

She added that this is a customary practice, as British companies exporting to Russia or the United States have to comply with the technical standards of those countries.

UK Expresses Commitment to Further Cooperation With Greece After Brexit - London
"The German car market is absolutely desperate to trade with us without tariffs or barriers. It also applies to wine industry, food industry etc… The EU needs to trade with us," Atkinson said.

A number of EU leaders have already stated that the United Kingdom would lose its access to the single market unless it keeps freedom of movement rules. On Sunday, UK Prime Minister Theresa May suggested at the Conservative party conference that the country’s exit from the European Union would be a "hard" rather than "soft" Brexit, meaning that control over immigration would be prioritized over the access to the European single market.

On June 23, the nationwide referendum on EU membership was held in the United Kingdom, in which 51.9 percent of voters said the country should leave the bloc. May promised to start the procedure of leaving the European Union by the end of March 2017. The negotiations with Brussels will take up to two years.