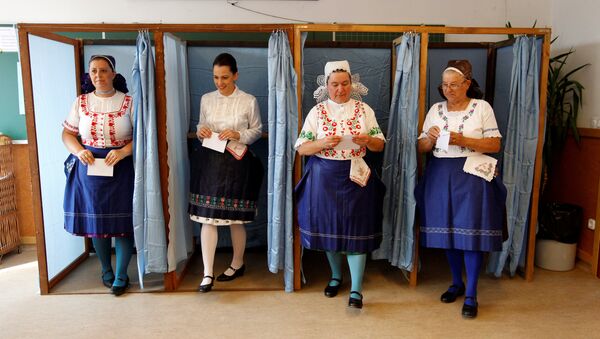 Hungary’s referendum on whether to oppose EU plans for a refugee relocation system has exposed the vulnerability of Hungarians to xenophobic "intoxication," summed up by support for the government’s hardline stance against refugees, Hungary’s ambassador to the UN told Sputnik.

While Sunday's referendum saw 98 percent of those who actually voted support Prime Minister Viktor Orban's rejection of the EU's "mandatory settlement of non-Hungarian citizens in Hungary," the referendum was deemed invalid because only 44 percent of eligible voters bothered to turn up to the polls.

Citizens in #Hungary #referendum did not heed #Orban's call. What EU now needs is dialogue to deliver solutions, not artificial tensions

​In a clearly confusing aftermath, both Orban and opposition parties were claiming victory, with Orban admitting that while a valid referendum would have been better than an invalid one, he would take his case to Brussels to put an end to refugee relocation plans.

Despite an expensive and extensive government-backed campaign aimed at securing victory for the 'No' vote, Orban ultimately failed to achieve a legitimate result.

"While about 3 million people voted, the rest of the country, about 5 million people, stayed away," Andre Erdos, Hungary's ambassador to the UN, told Sputnik.

​Erdos also expressed his bemusement at the reactions of Orban's right-wing Fidesz party following the result.

"In spite of this, not only to my amazement but the amazement of many others, the government simply ignored the fact that the referendum was invalid and they presented a roadmap.

​"From now on they will obviously go to Brussels and start a liberation struggle against Brussels. And then beyond all this, the government called this referendum an overwhelming victory. I just wonder what an overwhelming victory means in these circumstances. To me, this was an absurd situation, honestly speaking."

Many commentators have noted the lack of a valid vote will damage Orban's quest to put an end to refugee quotas, however Erdos said he believes the prime minister will extend his anti-immigration message at European level.

What will you do if Brussels ignores yr referendum on #EU Migrant quotas, citing low turnout? I just asked #Hungary FM. "They can't" he said

​"Our prime minister is a ready-made soldier who would be able to use anything in any circumstance," he said.

"The fact is that he doing all of this in the framework of an invalid referendum, and I guess people in Brussels would also be very well informed and they would know that the ‘strong weapon' he's referring to is not as strong as he thought it would be."

Beside the technicalities of the result, Erdos said he was concerned with how the aggressive nature of the Hungarian government's campaign translated into a strong anti-immigrant sentiment, particularly when the EU had proposed settling only 1,294 asylum seekers in Hungary.

For the cost of the #HungaryReferendum, Viktor Orbán could have paid each of the 1,294 refugees €31,000 to train, study or do public works

#Hungary referendum is a blow for #Orban. But 95% of voters said 'no' to #EU policy on #refugee reallocation. That's the bigger story.

​"Unfortunately this recipe can happen everywhere, even in Europe. Unfortunately this billboard campaign, which lasted several months in Hungary, has intoxicated people. We should also make note to others that we do not see the refugees here. There are just a couple of people — it's not an important number. In spite of this, this very massive campaign managed to instil into ordinary people that this is a danger and that we have to take a very strong position. And the result of this is that something like 98 percent of those who voted supported the government."