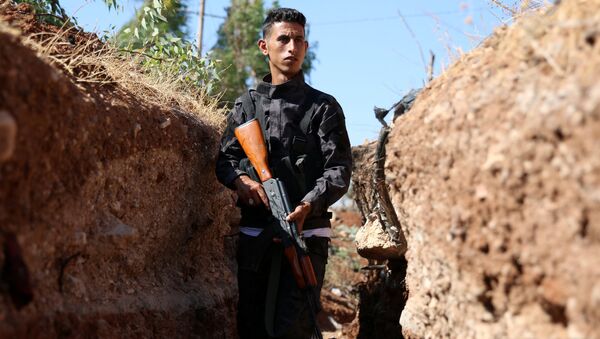 MOSCOW (Sputnik) — On August 24, Turkish forces, backed by US-led coalition aircraft, began a military operation dubbed Euphrates Shield to clear the Syrian border town of Jarabulus and the surrounding area of Daesh, outlawed in Russia and many other countries. Ankara also pledged to continue the operation until the threat allegedly posed by Kurdish militants active in the area is eliminated.

"In the course of the offensive, the intruding units have advanced to the Syrian territory over a distance of 10-20 kilometers [about 6-12 miles] and are restoring their fighting capabilities and are regrouping. We notice periodical armed clashes between the units of the FSA, the Turkish army and Kurdish militias in the area," Poznikhir said at a news briefing in the Defense Ministry.

He added that Daesh jihadists almost did not resist the offensive of the FSA troops in northern Syria and retreat to the south and southeast.