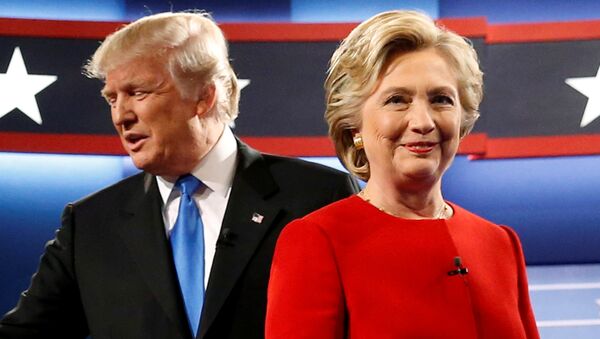 John Wight
All materials
The hugely anticipated first US presidential debate between Hillary Clinton and Donald Trump left no doubt that the American people deserve better.

Make no bones about it, with the world engulfed in crises from Eastern Europe to the Middle East and South China Seas, crises that have come about and intensified under the Obama administration — considered one of the most progressive in US history — whoever enters the White House next, will be faced with a clear choice of either continuing down the path of US global hegemony — a path fueled by the arrogance implicit in the grotesque idea that America is the greatest country on Earth, that it alone is the "indispensable nation," and that therefore, the rest of the world should submit to its power and leadership — or changing course in recognition that stability, peace and security can only be achieved by listening as well as speaking, and by supporting international law and national sovereignty as universal rather than discretionary principles to be determined by Washington.

While Donald Trump has made some positive noises throughout his campaign about resetting Washington's relationship with Russia, criticized the role of NATO and been willing to re-evaluate US foreign policy, he came over in the debate as a candidate who is unsuited to the rigors and demands of political leadership. He was incoherent, overly bombastic, and woefully unprepared for such an important event.

In truth, he displayed all the characteristics of the megalomaniac, a man who lacks empathy, humility, introspection and wisdom.

Consequently, based on this performance, it is almost impossible to imagine Donald Trump as President of the United States.

I say "almost" however, because what he does have in his favor is his status as a political outsider, a candidate whose main attribute is that he is not considered part of a Washington political establishment that is now so discredited among a large swathe of the American people it has given rise to anti-politics as the most common form of engagement in the country's democratic process.

When it comes to Hillary Clinton, though she was measured, assured, calm, and very well-prepared in contrast to her opponent, she came to the debate with a record and reputation irredeemably tarnished by the fact she is a pillar of the aforementioned Washington political establishment.

Her close association with Wall Street, allegations of financial impropriety surrounding the Clinton Foundation (the charitable foundation set up by her and her husband) the secret emails scandal, and her long support for a hawkish foreign policy, all of it adds up to a candidate whose worldview is driven by opportunism rather than principle.

Even more grievously, while secretary of state in the first Obama administration, Clinton played a key role when it came NATO's disastrous intervention in Libya, turning what had been a functioning state into a failed state, precipitating a refugee crisis of biblical dimension and scope in the process.

A woman who is a firm disciple of US exceptionalism and hard power when it comes to foreign policy, the prospect of Hillary Clinton entering the White House is, to put it lightly, a sobering one.

It should not go unnoticed that this particular US presidential election year is one in which the gulf between the assertion of the US as a beacon of liberty, justice, and human rights has never been greater than the reality of mass incarceration of mainly black people and minorities, the injustice and cruelty of an economic system that has seen the few prosper at the expense of the many, and the attack on human rights at home and abroad.

Irrefutable evidence of Washington's hypocrisy when it comes to its support for justice is the fact that Edward Snowden is currently residing in Russia as a fugitive from American justice for the "crime" of revealing to the world the existence of the covert and illegal policy of mass surveillance being carried out by US intelligence services.

It is also reflected in the fact that Julian Assange, who as founder of WikiLeaks was responsible for exposing the extent of US war crimes in Iraq, remains holed up within the Ecuadorian Embassy in London, where for over four years he has received sanctuary and protection from the risk of being extradited to the US.

Finally, the fate to befall Chelsea Manning, who provided WikiLeaks with the evidence of said war crimes, while serving as an intelligence analyst in the US Army, and who is currently languishing in a US military prison, stands as a withering reminder of the disjunction between the beautiful myth of America and its ugly reality.

What the American people desperately require is political leadership with the courage to confront this ugly reality and challenge the vested economic and political interests that have long impeded the glaring need for social justice in a society scarred by its shameful history of slavery, genocide and an addiction to war that has cost not only the American people but millions of people all over the world far too much in blood and suffering.

With Donald Trump in the White House the threat is civil war. With Hillary Clinton it is world war. Based on such a choice there is very little prospect of America's decline being reversed anytime soon.