How Trump Can Beat Clinton in Upcoming Presidential Debate 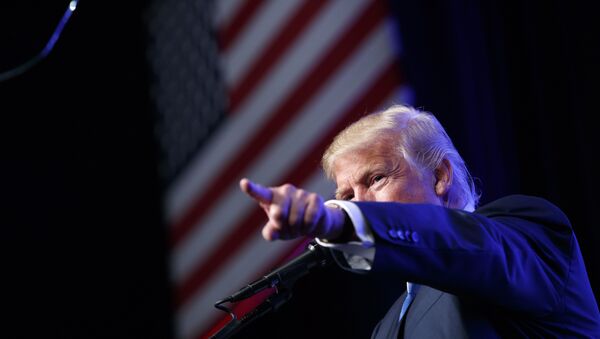 During the pre-election debate US Democratic Party presidential candidate Hillary Clinton will do everything possible to bring down her rival Donald Trump. However, according to Kimberley A. Strassel, if Trump takes the right steps, he may lead the country.

Trump Surges Again Before Debate, Tied With Hillary in Cooked +10 Democrat Poll
Clinton will try to make fun of Trump for his lack of experience in politics. She will also try to provoke him using his financial position, call him a fraud etc.

Basically she will use anything to distract the public attention from the scandals of the Clinton Foundation and Hillary’s e-mail issue, Strassel wrote for the Wall Street Journal.

However, according to the publication, Trump has a simple answer to all the personal attacks on part of the ex-Secretary of State.

“Mrs. Clinton’s own past is so malodorous, so rife with crooked deals and lies that Mr. Trump shouldn’t have to do much more than calmly question her credibility and then move on to better subjects,” the newspaper reported.

In addition, the Republican candidate could show voters that he has an optimistic and laid out plans about how to change the US.

“According to the New York Times/CBS poll, 48% of voters felt Mr. Trump could bring about ‘real change’ in the US, while only 36% said that of Mrs. Clinton,” according to the publication.

Hence, by being positive, Trump would draw a stark contrast.

However, the overwhelming focus of Clinton’s campaign has been its unrelenting charge that he is unfit to be president. Polls show this resonates with voters.

“A recent New York Times/CBS survey found that 47% of registered voters thought a Clinton presidency would be a ‘safe’ choice for the country, versus 30% who thought that about Trump. Fifty-five percent said that Clinton had the ‘right kind of temperament’ to be president, compared with 31% for Trump,” Strassel wrote for the newspaper.

On Monday voters will see how Trump’s temperament holds up under stress on live TV.

The Republican candidate is by contrast new to this and that could give him an advantage, in that he has the freedom and personality to be “unconventional and unpredictable.”

“It could give him new momentum toward the White House—if he can get this first one right,” the publication concluded.

The first presidential debate of the 2016 election season is set for Monday night at Hofstra University in New York State. The US presidential election is scheduled to be held on November 8.