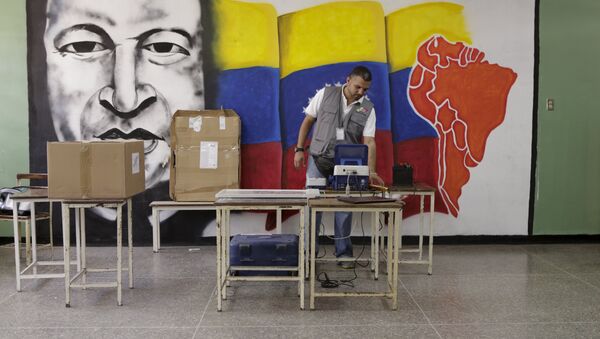 For many years, Venezuela, its former president Hugo Chavez and its idea of "socialism of the 21st century" have been enemies number one for the world media, Spanish lawyer and analyst Fernando Casado claims in his book "Anti-Journalists: Confessions to Media Attacks on Venezuela." In an interview with Sputnik, Casado discussed his conclusions.

Venezuela Stages UN Walk-Out on Temer to Protest Brazilian ‘Coup’
The idea of the book was born when Casado started to perceive the contrast between the real Venezuela and its image presented by the media.

According to Casado, the global media often distorts reality, presenting it as "truth" to most of the public.

The expert explains this phenomenon by several factors. First of all, the analyst says that the ideological confrontation between the media and the idea of "socialism of the XXI century" is logical and inevitable, given the fact that "big media are companies, the main motivation of which is profit."

The only thing that distinguishes them from other companies is that they sell not certain products, but information, Casado argued.

Large media companies often attack "initiatives that pose a threat to their ideology or commercial interests" as well as the interests of those who pay for advertising, Casado told in an interview with Sputnik. In particular, Casado referred to the article "Venezuela, More Deadly Than Iraq, Wonders Why," published in the New York Times, which among others things claimed that there are more people have been killed in Venezuela than in Iraq.

"What at first seemed absurd becomes a reality created with the help of the media. Such manipulative information is published very often. […]The media have realized that this kind of information about Venezuela is sold well," Casado stated.

Brazilian 'House of Cards': Is Temer Following Underwood's Path?
The worst thing is, however, is that this problem concerns not only Western media, but also Latin American newspapers. Some journalists who are actually quite open-minded and are aware of the real situation, "have no choice but to write what is expected of them by their editors in order to make both ends meet and have a decent salary," Casado said.

As a rule, these publications rely on sensationalism and are aimed at gaining more profit regardless of the fact whether their publications are false or not, the expert concluded.