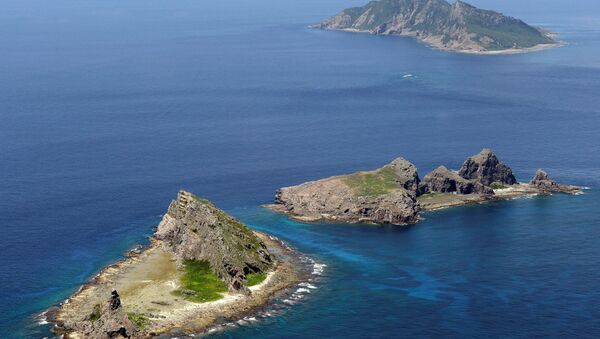 © REUTERS / Kyodo
Subscribe
Amid mounting tensions over disputed territories in the East and South China Seas, Beijing is preparing to launch stealthy UAVs to oversee and map contested waters and islands.

The South China Sea, which Beijing claims to be its sovereign territory, has some 12,186 islands dispersed across the area of over 3,000 square kilometers, with some of them located over a thousand kilometers away from the mainland China.

"Reefs and islands are important parts of our national territory,” Li Yingcheng, general manager of China TopRS Technology Co. Ltd said as quoted by Chinese state-run People’s Daily newspaper. “Precise information of their geology is crucial evidence for the demarcation of territorial waters and for safeguarding national maritime interests and security."

Drills in S China Sea 'Allow Russia, China to Better Respond to World Crises'
Li noted that “many of the islands and reefs in the South China Sea have much larger underwater portions than what is visible above water.”

To achieve the goal of monitoring remote and difficult of approach islands, Chinese engineers have designed two unmanned aircraft systems (UAS), ZC-5B and ZC-10, Li said. The drones are equipped with Beidou navigation system, a Chinese analogue of the Google system, and can cover in full territories of up to 80 nautical miles and partially areas spread across 1,500 nautical miles.

The ZC-5B, Li stressed, was specifically designed to map and survey open sea reefs. It has an operating range of 1,400 km and can work up to 30 hours.

The news comes as tensions over contested territories remain high in the region. The South China Sea has been a bone of contention in Southeastern Asia, with some six nations, including the Philippines, Brunei, Malaysia, Vietnam, Taiwan and China having overlapping territorial claims there.

Beijing Slams Japan’s Plans to Ramp up Engagement in South China Sea
In July, The Hague Permanent Court of Arbitration ruled than China has no historic rights to the territories it claims in proceedings brought before the court unilaterally by the Philippines. Beijing immediately lashed out at the decision, claiming it would not adhere to it.

Since then the other long-living dispute in the East China Sea between China and Japan, has exacerbated sharply. Both sides accused each other of a military buildup in the area and a number of trespassing.

000000
Popular comments
i don't have a dog in this fight, but i hate NATO & America so much, that i support BRICS and SCO. I've seen the fruits of American Exceptionalism: wars, corruption, greed, murder, deceit, pollution, theft, elitists. It's time to break away from this dead-end Ponzi scheme.

American Socialist
25 September 2016, 02:08 GMT1
000000
peaceactivist2, Isn't it sarcasm, for you to preach peace to others and encourage China to bulk up its military capacities at the same time, so that China can pound its weaker neighbors? And even if China manages to earn that respect you are talking about, it will be out of fear and not gratitude; those smaller nations will have hatred in their hearts just like you hate the US as of now.
Suman Chatterjee
25 September 2016, 12:35 GMT1
000000
Newsfeed
0
New firstOld first
loader
LIVE
Заголовок открываемого материала
Access to the chat has been blocked for violating the rules . You will be able to participate again through:∞. If you do not agree with the blocking, please use the feedback form
The discussion is closed. You can participate in the discussion within 24 hours after the publication of the article.
To participate in the discussion
log in or register
loader
Chats
Заголовок открываемого материала
Worldwide
InternationalEnglishEnglishMundoEspañolSpanish
Europe
DeutschlandDeutschGermanFranceFrançaisFrenchΕλλάδαΕλληνικάGreekItaliaItalianoItalianČeská republikaČeštinaCzechPolskaPolskiPolishСрбиjаСрпскиSerbianLatvijaLatviešuLatvianLietuvaLietuviųLithuanianMoldovaMoldoveneascăMoldavianБеларусьБеларускiBelarusian
Transcaucasia
ԱրմենիաՀայերենArmenianАҧсныАҧсышәалаAbkhazХуссар ИрыстонИронауОssetianსაქართველოქართულიGeorgianAzərbaycanАzərbaycancaAzerbaijani
Middle East
Sputnik عربيArabicArabicTürkiyeTürkçeTurkishSputnik ایرانPersianPersianSputnik افغانستانDariDari
Central Asia
ҚазақстанҚазақ тіліKazakhКыргызстанКыргызчаKyrgyzOʻzbekistonЎзбекчаUzbekТоҷикистонТоҷикӣTajik
East & Southeast Asia
Việt NamTiếng ViệtVietnamese日本日本語Japanese俄罗斯卫星通讯社中文（简体）Chinese (simplified)俄罗斯卫星通讯社中文（繁体）Chinese (traditional)
South America
BrasilPortuguêsPortuguese
NewsfeedBreaking
20:00 GMTUS House to Pass Bill to Fund Gov't. Until 2022, Suspend Debt Limit Until 2023
19:54 GMTTaliban Appoint New Leaders of Two Provinces in Eastern Afghanistan After Deadly Attacks
19:52 GMTIran's Nuclear Chief Urges IAEA to Avoid Politicization
19:39 GMTGlobal Stock Markets Plunge as Chinese Giant Evergrande Faces Mountain of Debt
19:34 GMT'He's a Threat': Head of India's National Commission of Women Hits Out at New Punjab State Chief
19:34 GMTDelhi Hospital Reports First Patient With Black Fungus in Lung and Kidney
19:28 GMT'Huge Insult to Dalit Community': BJP Scoffs at Congress' 'Empowerment Narrative' in India's Punjab
18:59 GMTBritain’s Former Ambassador to NATO Warns AUKUS Sub Deal Could Sink Alliance
18:55 GMT'Not Premeditated': New Book Reportedly Reveals How Biden Explained His 'Killer' Remark to Putin
18:50 GMTTwitter Down for Users Worldwide
18:46 GMTUN Refugees Chief Says Global Community Must Avoid Afghanistan's ‘Implosion’
18:46 GMTUS Launches Air Strike on 'Senior al-Qaeda Leader' in Idlib, Syria
18:44 GMTBiden to Hold Call With French President in 'Coming Days'
18:39 GMTJapan Wants Quad Navies to Hold Malabar Naval Drills in South China Sea
18:30 GMTUS Sanctions 7 Central American Officials Over Alleged Corruption
18:24 GMTUS Treasury Chief Warns ‘Economic Catastrophe’ Will Befall America If Debt Ceiling Deal Not Reached
18:09 GMTPicasso’s Daughter Donates 9 Heirlooms in Tax Arrangement With France
18:01 GMT'F**k Off, Leave Me Be Please': Sex Education’s Asa Butterfield Annoyed With Pic-Taking Fans
17:56 GMT'Booby' Prize: XR's Topless Protester Goes Bust to Raise Funds on OnlyFans
17:51 GMTPorn Case: Businessman Raj Kundra Granted Bail After 2 Months of Arrest