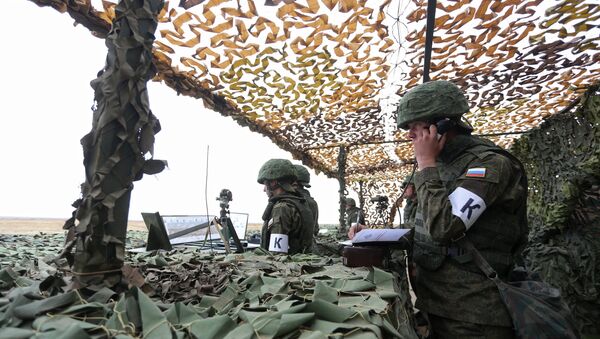 The eight edition of India-Russia Joint Military Exercise INDRA-2016 has begun in the Ussiriysk District in Vladivostok, Russia. The joint exercise will focus on ‘Counter Terrorism Operations in semi mountainous and jungle terrain under United Nations Mandate.’

New Delhi (Sputnik) — During Indra-2016, troops of both countries get the chance to practice working with each other over the course of eleven days.

“The troops of the Indian Army marched alongside the Russian Army in the impressive opening ceremony of Indra-2016. Both contingents marched in unison, past the saluting dais, exhibiting their resolve to further the Indo-Russian friendship," says a statement from the Indian Ministry of Defense.
The Indian contingent is commanded by Brigadier Sukrit Chadah.

Who You Gonna Call? India Sees Russia as Best Friend When Crisis Threatens
In the Indra-2016 Indo-Russian joint military exercise, 250 soldiers of the Kumaon Regiment are representing the Indian Contingent and the Russian Army is being represented by 250 soldiers from the 59th Motorized Infantry Brigade.

The Indra series of bilateral exercises has been one of the most important bilateral defense cooperation initiatives between India and Russia since 2003. The Indian contingent is scheduled to return to India once the exercise is complete in the first week of October.