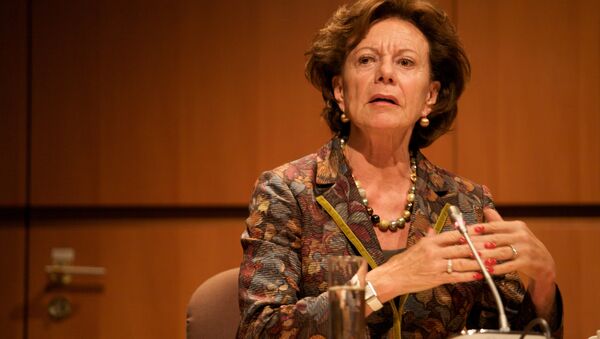 © Wikipedia
Subscribe
Amid continuing anger over the use of offshore tax havens to avoid liabilities in EU member states, the European Commission President Jean-Claude Juncker has written to former Dutch Commissioner Neelie Kroes asking why she failed to declare a directorship of a company based in the Bahamas.

There was outrage when the International Consortium of Investigative Journalists (ICIJ) exposed the fact that former competition chief Neelie Kroes had been the director of a company that was established in 2000 in the Bahamas to be the vehicle for a proposed deal to acquire some of energy company Enron's assets.

The directorship was not declared in the register of interests she completed when joining the European Commission in 2004, which is in breach of the Commission's rules that require Commissioners to declare all professional activities in the ten-year period before becoming a Commissioner.

​"Kroes's links to the proposed Enron deal would have remained secret were it not for a leak. That is why it is crucial to have public databases of company ownership, which civil society, journalists, and indeed the Commission itself, can use to check for potential conflicts of interest. We need genuine transparency around who owns what, otherwise we will have to rely on the fallible memories and record-keeping of politicians," said Carl Dolan, Director of Transparency International EU.

Corporate Europe Observatory's Vicky Cann said: "Neelie Kroes' involvement with an off-shore company looking to buy Enron assets, places further pressure on a Commission already under fire from its failure to tackle the revolving door in relation to Kroes and other Barroso II commissioners."

No problem w. #Barroso joining banks other than GS?! Conflict of interest for ex-commissioners ≠ excl. to one bank. pic.twitter.com/fFK0BMECS6

​"More recently, we have seen Ms. Kroes' brazen spins through the revolving door, to Bank of America Merrill Lynch, SalesForce and Uber, alongside the moves by former President Barroso to Goldman Sachs, and the move by former trade commissioner Karel De Gucht to ArcelorMittal.

"All of these examples, and more, show the need for an urgent overhaul of rules relating to the ethics of commissioners, including on their declarations of interest and on revolving doors. The Commission is not up to the job: there needs to be completely independent oversight and decision-making of commissioners' ethics by a body with powers to investigate, verify and apply sanctions when needed," Cann said.