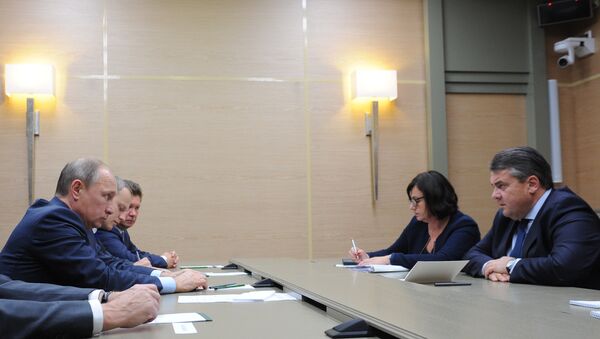 Commenting on the second defeat in a row for Chancellor Angela Merkel's Christian Democrats in Berlin on Sunday, Russian experts have begun considering the possible collapse of the CDU-led coalition in federal elections next year. At the top of their list of contenders for the chancellery is Sigmar Gabriel, who will arrive in Moscow on Wednesday.

Vice Chancellor Gabriel, who serves as the Minister for Economic Affairs and Energy, will arrive in Russia on Wednesday for two days-worth of talks with Russian officials on bilateral trade relations, bringing a delegation of German businessmen with him.

Gabriel, the chairman of Germany's Social Democrats (SPD), who are part of the Christian Democratic Union-led grand coalition along with the Bavarian Christian Social Union (CSU), is expected to speak with President Vladimir Putin personally during the course of his visit.

German Economy Minister Planning to Visit Moscow September for Cooperation Talks
His visit comes on the heels of another major regional electoral loss, this time in Berlin, for Chancellor Merkel's Christian Democrats (the CDU). On Sunday the party faced its poorest electoral showing in the region since the country reunified in 1990, with the Social Democrats winning a plurality, allowing them to form a coalition with Die Linke and the Green Party, while the right-wing populist Alternative for Germany (AfD) received 14.6% of the vote, just over three points less than the CDU's 18%.

The defeat comes two weeks after the CDU's loss in the northeastern state of Mecklenburg-West Pomerania, where the party slipped into third place behind the SPD and the AfD in elections September 4.

Germany is set to hold federal parliamentary elections next September. Commenting on the CDU's string of losses, independent journalist and PolitRussia columnist Dmitri Narkevsky suggested that while it's certainly too early to predict the results of that race, the trend seen over the last month must certainly be concerning for Chancellor Merkel and her party.

"Against this background, experts are starting to actively search for candidates who may replace the Iron Lady of German politics," Narkevsky noted. "If Angela Merkel loses, the future leader of Germany is likely to be from the SPD. The center-left Social Democrats have every chance to emerge out from their role as coalition partner to the CDU/CSU, and to form the new government."

According to the journalist, Gabriel is the most logical likely SPD candidate for the chancellery, given his role as party chairman. His intraparty rivals include popular Foreign Minister Frank-Walter Steinmeier, and Martin Schulz, the president of the European Parliament.

"Recognizing that the electoral competition will only increase as the elections approach, Gabriel, combining his role as vice chancellor and minister of economy and energy, is attracting more and more attention; not only in Germany, but in Russia as well," Narkevsky emphasized.

EU Divisions on Anti-Russian Sanctions Create 'Window of Opportunity' for Moscow
In this situation, it's only logical to ask what kinds of changes a Gabriel chancellery might mean, particularly as far as relations with Russia are concerned.

Noting that an SPD-led government might make cosmetic changes to the country's economic policy, as well as corrections to a traditionally liberal migration policy, the journalist recalled that Gabriel has been at the forefront of SPD politicians calling for a review of the current policy for accepting and settling migrants; he has criticized Chancellor Merkel and her party for overestimating the country's resources, and called for a limit to the number of migrants which the country can take in.

As far as European policy is concerned, Narkevsky explained that "for all his criticism of the state of affairs in the Eurozone, Gabriel understands that the European Union project is beneficial primarily to Germany, and that every effort must therefore be made to preserve and strengthen it. This is why the vice chancellor has demonstrated his commitment to protecting the Union from another Brexit," including by his support for measures to force the UK to give up preferential economic relations with the bloc.

As for the Transatlantic Trade and Investment Partnership (TTIP) with the United States, Gabriel, in his official capacity as German minister of economy and energy, has played an important role in standing up for German interests, perhaps signified most bluntly by his statement last month that the negotiations "have de facto failed."

At the same time, however, Narkevsky also recalled that Gabriel has been not just supportive, but instrumental in convincing fellow SPD politicians to support the Comprehensive Economic and Trade Agreement (CETA) between the EU and Canada, in spite of the fact that it poses economic and ecological threats very similar to the TTIP.

"This kind of duality demonstrates that the vice chancellor's anti-American rhetoric may have two reasons, including a) an attempt to counter US pressure, and to carve out certain benefits for Europe under the TTIP, and b) using the situation for a possible future political campaign." In any case, Gabriel refuses to reject future negotiations on the agreement.

Reasons Behind France, Germany Adopting Russian Approach to Ukrainian Crisis
As far as Berlin's policy toward Moscow is concerned, the journalist emphasized that Gabriel could be characterized as "a consistent critic of anti-Russian policy."

"He has repeatedly spoken about the unproductive nature of sanctions, and the need to search for points of convergence with Moscow." In the past year, Gabriel proposed a gradual abolition of sanctions, and told German media that Western countries could not simultaneously sanction Russia while expecting cooperation in Syria. According to the official, the conflict in Ukraine should not be allowed to define Russian-Western relations as a whole.

"Taking account of his post, such statements sharply distinguish Gabriel from other major Western politicians," Narkevsky noted. "In addition, Gabriel is in favor of the restoration of economic ties with Moscow. One of the main projects for this in this area is the Nord Stream II [gas pipeline]."

Effectively, the journalist noted, as far as foreign policy is concerned, Gabriel resembles another SPD politician – Gerhard Schroeder, who presided over arguably the warmest period in Russian-German relations since the end of the Cold War.

"It is the defense of German interests, regardless of the desires of other geopolitical powers, which could put Gabriel on the same level as the former chancellor. He is already taking steps in this direction. Schroeder was the father of Nord Stream I – Gabriel is promoting Nord Stream II. Schroeder advocated a close partnership with Moscow – Gabriel criticizes anti-Russian sanctions. Schroeder promoted Germany's economic expansion – Gabriel defends German interests in talks with the US."

Merkel 'Has No Qualms About Squandering Germany's Political Legacy'
Ultimately, Narkevsky suggested that "all these steps by the vice chancellor can bring him the necessary support within his party and from among a large part of the electorate." But for a serious chance at the chancellery, he will need to overcome several obstacles.

First off, in addition to intraparty competition, Gabriel's SPD would have to fight hard for Germany's left-oriented electorate, including Die Linke and the Greens, who espouse many of the same social democratic ideas. "On the other hand, part of the voters considering themselves centrists can move over to the right flank, where new forces, for example Alternative for Germany, are active."

"Most importantly, Merkel is not as weak as many would like to think. Realizing that exactly one year remains until elections, the Chancellor will attempt to step up efforts to regain voters' trust in the CDU…Certain changes in the rhetoric of Merkel and her supporters are already appearing; Gabriel himself has been forced to use similar centrist slogans. The question is whether voters can believe whether Gabriel could implement his promises no worse than Merkel has hers."

Will Next German Chancellor Abandon Merkel's Hardline Euro-Atlanticist Stance?
"Amid the growing signs of the SPD leader's independent positions, outside observers, and particularly those from Russia, have one central question on their minds: cam Gabriel stick to his balanced views as head of the German government, in case of victory in elections?"

After all, Narkevsky recalled, recent political history has shown "the magic of shifting political preferences of politicians who have attained power. Merkel herself once stood out with her knowledge of the Russian language, and assured Russia of a strategic partnership." Ultimately, whether Gabriel would be able to withstand pressures from Brussels, Washington and internal lobbyists and pursue a truly independent German foreign policy remains an open question, and one which will find its answer less than a year from now.