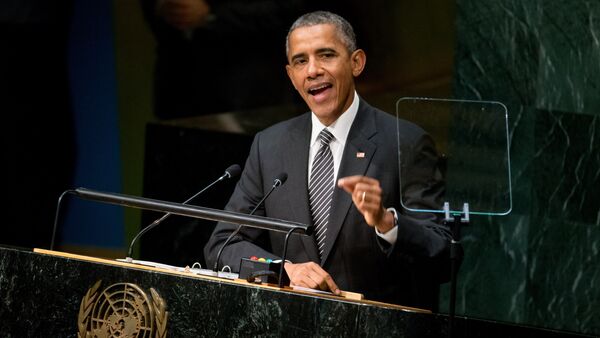 Barack Obama addressed the UN General Assembly in New York City for the last time as US president.

Obama recalled achievements made during 8 years of his presidency. He mentioned the thaw in US-Cuba relations, as well as the facilitation of the Colombian ceasefire.

Obama spoke about the Ukraine crisis, claiming that during the Maidan protests people took to the streets because they "wanted better life like in the Baltic states and Poland."

The US president believes that Ukraine coup was "not a plot from abroad. They [Ukrainians] took to the streets because their leadership was for sale"

Obama claimed "Russia trying to recover past glory through force."

"Russia continues to interfere in affairs of its neighbors," he continued, warning that Russian borders will become less secure if Moscow continues such a policy.

"If Russia continues to interfere in the affairs of its neighbors, it may be popular at home…but over time it is also going to diminish its stature and make its borders less secure," Obama stated.

The US president called for a political solution to the Syrian crisis, emphasizing that "no ultimate military victory will be won in Syria."

Obama said that Palestine must recognize the legitimacy of the Israeli state, while Israel has to realize it cannot permanently occupy Palestinian land.

"Surely, Israelis and Palestinians will be better off if Palestinians reject incitement and recognize the legitimacy of Israel, but Israel recognizes that it cannot permanently occupy and settle Palestinian land," Obama stated.

North Korea nuclear tests endanger "all of us," Obama said, calling for an international response.

Nations around the world that possess nuclear weapons need to commit to both reducing their stockpiles and never test those weapons again, US President Barack Obama said at the UN General Assembly on Monday.

"Those nations with these weapons, like the United States, have a unique responsibility to pursue the path of reducing our stockpiles and reaffirming basic norms like the commitment to never test them again," Obama stated.

World leaders participate in the morning session of the 71st Regular Session of the UN General Assembly (UNGA 71) in New York on Tuesday, September 20.