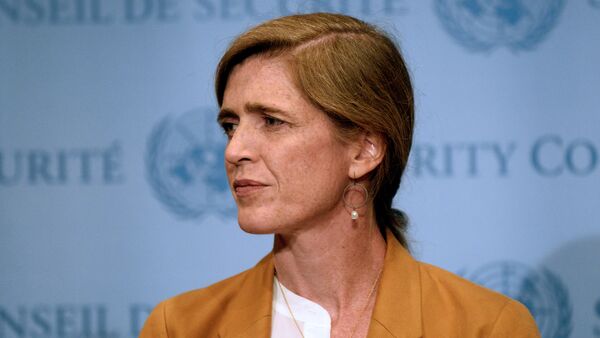 John Wight
All materials
The massacre of dozens of Syrian soldiers in a US airstrike, while the Syrian Army was engaged in combat against Daesh in the eastern city of Deir Ezzor, leaves Washington with no hiding place over its role in a conflict needlessly prolonged by the fact its primary objective remains the overthrow of the legitimate government of the Syrian people.

Compounding the atrocity were the outrageous and despicable comments of Washington's UN Ambassador, Samantha Power, in response, after making her displeasure known at being forced to attend an emergency closed session of the UN Security Council called by Russia. In fact Power made clear that in her eyes the privilege of calling such emergency sessions is the provenance of the US and US alone.

Rather than take the opportunity to apologize for this horrific "accident" and convey, on behalf of the US government, her condolences to the families of the Syrian soldiers killed in the airstrike, the United States UN Ambassador sought to deflect from this atrocity with a long diatribe against Russia, the Syrian government and its armed forces, accusing each of the aforementioned of purposely targeting civilians and civilian targets in Aleppo. It is the same transparent anti-Russia and anti-Assad propaganda that the US and its allies have dealt in throughout a conflict in which the participation of the US is a clear violation of Syrian sovereignty.

#Zakharova: Dear @AmbassadorPower I would advise you to visit Syria and meet people there https://t.co/xnJIh4qVRW pic.twitter.com/W3OXg1RH8B

60,000 Syrian soldiers and officers have perished in the course of this brutal war, killed defending their families, communities and country from a modern incarnation of the Khmer Rouge in the form of Daesh, Nusra, and the so-called moderate rebels, who only exist in the dreams and fantasies of US propagandists and western ideologues.

The question all-right thinking people now demand an answer to is when did the US start flying sorties in support of Daesh?

The reason this is a pertinent question to ask is that straight after this airstrike, Daesh mounted an offensive against the airbase that was in the process of being defended by the Syrian Army.

#Churkin: #US might have lost control over the situation in Syria & can't separate between opposition and terrorists https://t.co/wEYKYuZOHd

Was this just a coincidence, or is it, as many believe, evidence of a coordinated air and ground assault?

You can't blame people for being suspicious when all you need do is strip away the obfuscation to see that Washington would prefer Daesh to succeed in this conflict than the Syrian government and its armed forces.

Out of Control Juggernaut

It is a state of affairs that confirms Washington's continuing attachment to the vast experiment in democracy it has been conducting in the region since 9/11, an experiment responsible for the destruction of Iraq, Libya, and wider region's destabilization.

The human cost is neither here nor there in the eyes of US hawks, Republican and Democrat. All that matters is that any state or government that dare refuse to bow to America's writ is toppled as it stumbles around the region like an out of control juggernaut laying waste to everything it comes into contact with.

The United States and its allies has no place in Syria, never has had any place in Syria, and never will have any place in a country whose people have over the past five years heroically resisted a determined attempt to destroy one of the few surviving secular and non-sectarian states in the Arab world.

It would not be the first time that the US has lined up on the same side as barbarism in its history.

In Central America, Cambodia, and Afghanistan it has funded and armed groups and ideologies whose brutality and inhumanity has been medieval, even primeval, in its extremism. The Contras, the previously mentioned Khmer Rouge, and the Mujahadeen in Afghanistan, which late morphed into al-Qaeda, each have benefited from US largesse.

In Syria, the government — led by President Bashar al-Assad — retains the support of the majority of Syrians, who understand that it his government all that stands between the country's survival and destruction.

There is no mature democratic alternative waiting in the wings to take his place. The reality is that if he stood down as Syrian President at this juncture, Syria's state institutions would collapse and its army would follow suitunder the weight of the ensuing demoralization and anarchy.

If the Americans genuinely and sincerely held the wellbeing of the Syrian people as a priority in this conflict, they would have already joined with Russia, the Syrian government, and its allies in defeating Daesh, Nusra, and the various other groups of religious and sectarian fanatics.

This they would have understood was necessary not only for Syria, not only for the region, but for their own people, who find themselves a full fifteen years after 9/11 more vulnerable to terrorism than they have ever been.

000000
Popular comments
I would use other terms rather than mendacity.
michael
20 September 2016, 11:24 GMT
000000
Not only I but 1000 + comment's have written here !!!!! witch say ...... usa state and people are terrorist and liars without behavior and honor !!! Why I say all so the American people are the same is that there are just not to comment on the behavior of there government !!!! The usa has attack a sovereign Syria!!! And bomb further after a peace agreement with Russia !!! It was like a hidden murdering !!!
tobi.gelando
20 September 2016, 12:39 GMT1
000000
Newsfeed
0
New firstOld first
loader
LIVE
Заголовок открываемого материала
Access to the chat has been blocked for violating the rules . You will be able to participate again through:∞. If you do not agree with the blocking, please use the feedback form
The discussion is closed. You can participate in the discussion within 24 hours after the publication of the article.
To participate in the discussion
log in or register
loader
Chats
Заголовок открываемого материала
Worldwide
InternationalEnglishEnglishMundoEspañolSpanish
Europe
DeutschlandDeutschGermanFranceFrançaisFrenchΕλλάδαΕλληνικάGreekItaliaItalianoItalianČeská republikaČeštinaCzechPolskaPolskiPolishСрбиjаСрпскиSerbianLatvijaLatviešuLatvianLietuvaLietuviųLithuanianMoldovaMoldoveneascăMoldavianБеларусьБеларускiBelarusian
Transcaucasia
ԱրմենիաՀայերենArmenianАҧсныАҧсышәалаAbkhazХуссар ИрыстонИронауОssetianსაქართველოქართულიGeorgianAzərbaycanАzərbaycancaAzerbaijani
Middle East
Sputnik عربيArabicArabicTürkiyeTürkçeTurkishSputnik ایرانPersianPersianSputnik افغانستانDariDari
Central Asia
ҚазақстанҚазақ тіліKazakhКыргызстанКыргызчаKyrgyzOʻzbekistonЎзбекчаUzbekТоҷикистонТоҷикӣTajik
East & Southeast Asia
Việt NamTiếng ViệtVietnamese日本日本語Japanese中国中文Chinese
South America
BrasilPortuguêsPortuguese
NewsfeedBreaking
13:41 GMTRussia's Arctic National Park Reports Disappearance of Peninsula on Franz Josef Land
13:33 GMTPakistan Says Its Serbian Embassy Accounts Hacked After Posts Criticising PM Khan Appear Online
13:33 GMTSri Lankan Factory Manager in Pakistan Beaten to Death by Mob For Alleged Blasphemy
13:06 GMTMossad Chief Vows Iran Will ‘Never Have’ Nuclear Weapons', Says ‘Bad Deal With Tehran ‘Intolerable’
13:06 GMTIndia Scouts to Induct Army's First-Ever Terminal Guided Munitions to Prevent Collateral Damage
13:00 GMTTrump's False Positive COVID Test is Non-Story, US Media Has Disgraced Itself Again, Observers Say
12:41 GMTMother of Addicts Says US Could Avert Record Overdose Deaths if Issue Treated as Epidemic
12:04 GMTTop Indian Genome Scientists Recommend COVID Booster Dose for Over-40s In Omicron Scare
12:00 GMTBiden Boasts About His Liaison Role During Six-Day War When He Was Law School Student - Media
11:45 GMTOil Giant Shell Pulls Out of Cambo Field Off UK
11:42 GMTScotland Yard Warns Another Terror Attack in UK ‘Highly Likely’ During Christmas Season
11:33 GMT'Quad' Refuses to Co-Sponsor UN's 'Olympic Truce' Resolution, Australia and US Mull Boycott
11:21 GMTWHO Has No Data on Deaths Linked to Omicron Variant
10:52 GMTFormer French Captain Patrice Evra Takes a Dig at Jamie Carragher for Cristiano Ronaldo Remarks
10:47 GMTPETA Lambasts Anthony Fauci Over Failed HIV Experiments Involving Monkeys
10:34 GMTAustria's Interior Minister Nehammer Announces His Candidacy for Chancellorship
10:23 GMTEpstein Ex-Butler Dishes on Driving Underage Girls, ‘Little Black Book’, Sex Toys at Maxwell Trial
09:14 GMTRoyal College of Midwives Scrambles to Apologise For ‘Postnatal People’ Gaff ‘Erasing’ Mothers
08:45 GMTFrance, UAE Sign Multi-Billion Dollar Rafale Warplanes Deal
08:34 GMTTory Peer Mone Slammed as ‘Racist and Abusive’ Over Alleged 'Waste of a Man’s White Skin’ Message