The Revolution Will Not Be Televised: Russell Brand Admits Failure 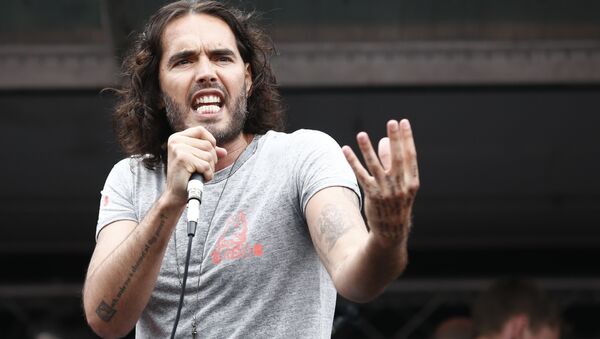 © AFP 2021 / Justin Tallis
Subscribe
British comedian and self-styled revolutionist Russell Brand has admitted his call for a revolution back in 2015 was a failure, according to the UK tabloid press.

It's May 2015 and holed up in his East London pad, with trendy exposed internal brickwork, Brand tells the "yoof" not to bother voting in the UK General Election.

100% agree with @rustyrockets — I don't want to legitimise the rule of any of these elitist parties with my vote! pic.twitter.com/ZpHCGkbIGL

​But then Ed Miliband, Labour leader at the time, pops over to Brand's Shoreditch flat for a cup of tea and a chat which was broadcast on Brand's YouTube series, The Trews.

I miss this guy from the public eye! https://t.co/5wO0dtcide

​Miliband was subsequently mocked for adopting a "mockney" (fake east London accent) for the interview with Brand, in what ended up being an embarrassing episode for the Labour leader who failed to win the election.

Speaking with the great gift of hindsight, Brand now admits that his venture into mainstream politics was unsuccessful.

"I can smile about it now, but at the time it was terrible."

Please tell Russell Brand 15 minutes is up.
Dont Vote is one of the most irresponsible pieces of advice a supposed intellectual can give.

​"I'd lost myself a little bit," Brand is reported saying.

According to British tabloid newspaper, The Sun on Sunday, he said:

"Do you remember when I broke the general election because Ed Miliband came around my f***ing house, do you remember that? I was thinking while he was in there, it's a bit weird that this is happening."

The stand-up comedian, without a hint of hubris, also admits to feeling guilty for his role in Labour's failure to win the election.

"The next day when it turned out the Conservatives were elected more than ever before, I thought 'oh f***' I've broken England, s**t."

Conservatives Win Overall Majority in UK General Election With 331 Seats
After first telling Britain's "yoof" not to bother voting, in a later episode of The Trews, Brand urged people to vote to "get the Conservative party out of government."

At this point, Brand it seems, had as much political influence as Ed Mliband; the Conservative party won the 2015 General Election, not by much, but enough to put them in charge.

It is now September 2016 and the Tories are running Britain. Brand's calls for a revolution seem a distant past, as he himself admits: "I can't tell if it was spiritual enlightenment or mental illness."