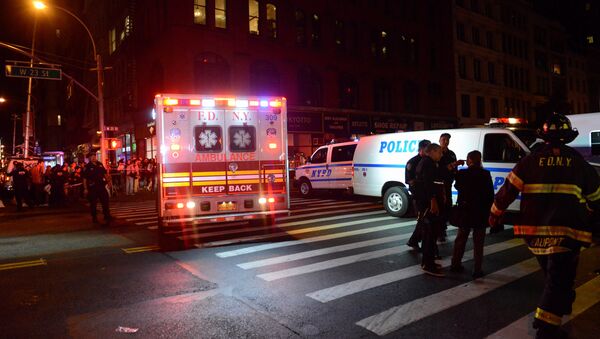 A total of 29 people have been injured in the explosion that hit New York City’s Chelsea neighborhood in Manhattan on Saturday night.

MOSCOW (Sputnik) — The explosion at the moment has not been officially linked to terrorism, but is believed to be intentional. A second and third "suspicious" objects have been reportedly found in the follow-up police operation.

The explosion took place in the intersection of 23rd Street and 6th Avenue at 8:30 p.m. on Saturday (00:30 GMT Sunday). Investigators, cited by CNN, believe that an explosion device was planted inside or near a dumpster in a crowded area where multiple bars and restaurants are located.

"We want to be very clear, the early indications, the initial indications are this was an intentional act," New York City Mayor Bill de Blasio told reporters.

The official added, however, that in the meantime the incident is not believed to be a terrorist attack.

New York City Blast: What is Known So Far About Manhattan Explosion
The mayor also said that it is too early to talk about the connection between the blasts in New York and New Jersey.

An improvised explosive device exploded on Saturday morning in Seaside Park, New Jersey, along the route of a major charity race that was expected to involve some 5,000 athletes. A Semper Five race, that was expected to have started by then, was delayed due to late sign-ins, "which thankfully avoided a large number of runners in the area," the statement issued by the local prosecutor's office read.

A possible second explosive device was later found in another location in Chelsea. At 12:13 a.m., the New York City Police Department called on the local residents "to stay away from windows facing 27th Street until we clear the area of a suspicious package."

New York Fire Department Confirms 26 Injured in Massive Explosion in Manhattan
The device, safely removed by the police bomb squad, turned out to be a pressure cooker hooked up to a cell-phone with wiring protruding, CNN reported adding that law enforcement officers refused to say whether it was rigged with explosives.

On April 15, 2013, two pressure cooker bombs exploded close to the finish line of the 2013 Boston Marathon killing three people and injuring 264 others.

US Police Find Third Explosive Device in New York City
During the follow up operation, police reportedly detected another suspicious object two blocs away of the 23rd street. However, later media reported that it was a false alarm and nothing more than trash.

Police continue the investigation at the scene with crosstown traffic eastbound and westbound closed from West 14 Street to West 32 street and from 5th Avenue to 8th Avenue, NYPD said in a statement.