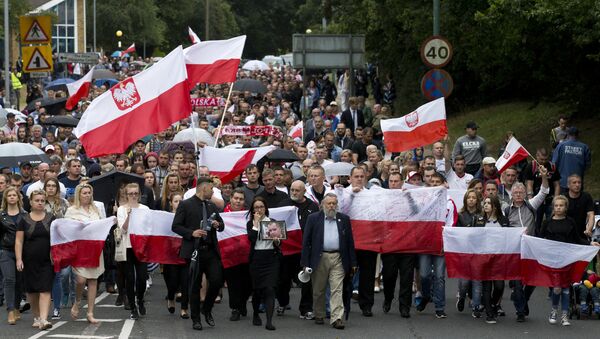 While the EU has responded to immigration from outside with xenophobia, many in the UK have directed their hatred at their fellow Europeans, former Polish MP Miroslaw Orzechowski told Sputnik.

Norwegian Minority Report: Xenophobia Justified by Crime Statistics
In an interview with Sputnik, independent Polish commentator Miroslaw Orzechowski called xenophobia-driven hate crimes a common problem for Europe, which he said should be resolved as soon as possible.

The interview came after a Polish man reportedly suffered head injuries after he was attacked on Sunday by about 30 assailants in Leeds, Britain's third-largest city. According to the Guardian, the 28-year-old man was beaten by a gang of teenagers and the attack was "racially aggravated" according to local police.

The incident occurred on the same day that UK Prime Minister Theresa May told her Polish counterpart Beata Szydlo that "hate crime has no place in UK society."

Notably, the Sunday attack became the 18th such incident since UK voters took part in the referendum and decided to back Britain's exit from the European Union.

"The attack flies in the face of London's allegations that Britons do not behave aggressively towards foreigners; and on the other hand, it reflects ever-increasing tensions in Europe," Orzechowski said.

In this vein, he added, one cannot be satisfied with a simple explanation of Britons allegedly being unhappy about Poles taking British jobs.

This is also the case with Poland, Orzechowski said quoting the newspaper Rzeczpospolita as saying that about 80 percent of Poles do not want to host foreigners any more.

"We are talking about Ukrainians arriving in Poland in huge numbers and taking Polish jobs. This is a common illustration of the situation in Europe, which should somehow be resolved. For example, this may lead to closing the borders," he said.

When asked to comment on current xenophobic anger in Poland, he said that "none of the civilized people, especially Christians, and Catholics, have a right to persecute other people just because they are of a different origin."

Media reports said last week that Polish President Andrzej Duda wrote to letters to the heads of the Church of England and the Catholic Church in Britain, asking them to help prevent attacks on Poles living in the UK and combat a climate of "aversion and animosity."

Migration Policy of Post-Brexit UK Faces Social, Economic 'Trade-Offs'
The attack underscores that British xenophobia isn't limited to non-whites or Muslims: in late August, 40-year-old Arkadiusz Jozwik died after he was beaten by teenagers in the town of Harlow in southeast England, located about 30 miles north of London.

Meanwhile, Michael Moller, Director General of the UN Office at Geneva, accused several EU leaders of "pandering" to "xenophobic" and "racist positions," adding that they had allowed the political fallout from migration to "grow out of proportion."

The diplomat criticized the failure among EU member states to share the "manageable" burden of allocating asylum seekers that he estimated amounted to 0.2 percent of Europe’s population.